Will You Marry Me?

If you read about my great grandfather, Noach Swenson in a previous blog (The Man on the White Horse) here’s another story about him. About how he met and married his wife, Emma.

Noach immigrated to Minnesota from Sweden in 1869 at age 19. His sister and her husband were already living near Jordan, Minnesota. Noach worked in the area until he was 21, until he could homestead. A few years later, a group of these immigrants were together socially… and another Swenson (no relation), Muns Swenson and Eva, were at the gathering with a baby in a cradle. People teased Noach about not being married. He said, “I’ll marry that one”, meaning the baby in the cradle. 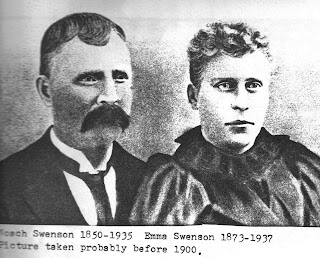 And he did. He married the baby, Emma, when she was 16, and he was 38. The community used to have barn dances. Emma loved to dance and Noach was attracted to the vivacious girl. But what did she see in him? There’s no record of the whys behind it. Logically he married because he was attracted to her, maybe even loved her, and needed a wife to help him with his homestead. But Emma? A vivacious 16-year-old? Did she want to get away from home that badly? Did she love him? Did her parents approve and encourage her? Or were they against it? Whatever the motivation and emotions, the two were married in 1888, had six children, and were together until their deaths in the 1930’s.

﻿
﻿On the other side of my family was C.M. Holmquist. He came over from Sweden about the same time as Noach (1869-ish). He was married to Sarah Christina Jonnsen in 1880 and they had nine children. My grandmother, Ruth, was the youngest, born in 1900. She was born eleven months after her brother Arthur died of polio, at age four. Birth and death must have been ever-present… There were nineteen years between child #1 and child #9. Sarah had to be exhausted. She always looked frail…

Sara Christine died in 1922 at age 67. Her daughter, Alma died a few months later of a sudden heart attack—at age 25.
Heartbroken, C.M. took a trip back to Sweden. On the trip he met Elvira Mattson. When he came home he presented her to his family. Surprise! Welcome my new wife! A ship-board romance? C.M. was seventy.

Logic might suggest that people were more pragmatic back then, that they knew life could be cut short at any time and so didn’t waste time. Also, especially in rural communities, there were fewer prospects to choose from. Communication and transportation was limited beyond your community. The people you saw every day was who you got. Plus, there was the language and culture barrier. To find someone from the same background and roots probably took precedent over finding your true love or waiting for Mr. or Miss Right.

I’m sure many families have such odd pairings, either by age or circumstance. I’d love to hear some of your stories . . . //Nancy
Posted by Nancy Moser at 7:00 AM