The Man on the White Horse

I recently helped my 90-year-old parents move into a retirement community. While going through a lifetime of possessions, we came upon an amazing photograph. I asked my mother “What’s this?” She said, “The man on the white horse is your great grandfather, Noach Swenson. His wife, Emma is in the surrey.” Looking closer at the picture I saw a band, playing in the field! Also, everyone was very dressed up. “What’s the occasion?” Mom said Grandpa Noach had purchased five new binders and the community was celebrating.
﻿﻿


Amazing. Also amazing that they’d had the foresight to get a photographer to come out and take a picture of the day. It’s probably in the 1890’s… Actually, I found a newspaper article that said the man who sold Noach the binders, from the dealership in Canby, Minnesota, arranged for the band. Marketing, marketing…
﻿ ﻿
As photographs often do, it made me delve into my family history a bit more. Luckily, my mother had done the genealogy of both sides of the family back in the 70’s (before the Internet!) So I didn’t have to look too far. I found out more about Noach and Emma. ..
He came to America in 1869, at the age of 19, the first of his family to leave Sweden for the “Land of Opportunity”. As the ninth of eleven children, he would never inherit anything in Sweden. His ambition was to become an independent, land owning farmer, but he had to work a few years to earn enough money to realize his ambition. He worked on the railroad and as a farm hand until he went to Lac qui Parle County in Minnesota and filed for a homestead in 1879. He had to return to his farmhand job to earn more money, but he did order a house built on the homestead. When he returned he saw that it had no windows and no door! He had to whittle out an opening with his pocket knife! He fashioned a crude door but had no hinges, so cut a strip of leather off the top of each of his boots and fashioned leather hinges!

He and a neighbor pooled their resources and each furnished two oxen for a four-oxen team to break the sod. They each started working 20 acres. Staying warm in the house was a challenge in the Minnesota winters. Trees were scarce and couldn’t be spared for fuel, so prairie grass was twisted into tight knots to slow its burning, and then put away for winter use. For the rest of his life, Noach planted many trees… when a grove died in the 1930’s, he was very sad. Trees were special to him.
﻿﻿
He knew the family of Mons Swenson (no relation). Mons had operated a ferry across the Minnesota River near the present town of Jordan (at that time Belle Plaine was the nearest town to the ferry.) Mons and his wife, Eva had a daughter, Emma—who was born in a log house at the ferry site in 1873. They moved to Noach’s area and lived in a sod house until theirs could be built. One winter the snow covered the house and they had to shovel their way out, tying a rope between the front door and the barn in order so they wouldn’t get lost in the blizzard.

Noach, age 38, decided he wanted to marry the lively Emma—age 16! And so they married in 1889. “Though he was a serious, reserved man who did not join much in gayety, he admired the pretty girl with the rosy cheeks and curly hair who twirled so gaily to the notes of her father’s fiddle.” He built a two-story house for her on the land adjoining his original farmstead. Twenty-two years age difference? Yikes.
﻿


﻿They had seven children (one died young), and Emma was busy. During harvest, more so. She would have to cook three meals a day, and two lunches for the 20 farm hands. She had to take the lunches into the fields, but they came in for meals. She filled a crock with pancakes before she called them to breakfast in order to keep up with their appetites. One time (because of rain and delays) she had to feed 20 farmhands for 28 days straight. Emma was worn out! 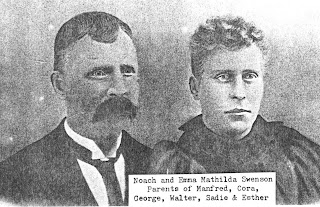 Once, newlywed Emma and her newly arrived sister-in-law from Sweden were washing clothes. They had a hot fire going on the stove. The chimney caught on fire. Emma told her SIL to ring the bell to call the men in, but got two buckets of water and climbed up on the roof and poured the water down the chimney herself. But it flamed up again and she realized they were going to lose the house. She went inside to save what she could. All she saved was her sewing machine. A pair of new shoes were on the treadle, but one fell off and the fire was too hot to save it. So Emma lost her house, with all her new wedding gifts and possessions inside. She saved a sewing machine and one new shoe. Later, the barn burned and 21 horses were lost. No insurance claims. No stores nearby to easily buy new things.

Once Noach froze his feet going to get his cattle down by the river in a snowstorm. His toes were so badly frozen that they turned a dark blue after they thawed. He couldn’t wear shoes, but had to wrap his feet in cloth until they healed.

In his later years, after he’d retired and moved to town, Noach still loved to ride out to the farm. He marveled at the gravel roads, for when he’d come to Minnesota, there were no roads. To find their way he said they’d get to the top of a ridge, look around, make a plan of action, and go to the next ridge, where they’d make a new plan. Sounds like a good philosophy of life in general… And perhaps that’s how they got by, how they kept going amid all the hardships and challenges. They’d go to a high place and look for a new way to go… I know their faith grounded them and provided much comfort. They were founding members of the Providence Valley Lutheran Church--which is still a vibrant church.

Noach’s farm prospered and was continued by my grandfather, George. My mother grew up on that farm, and only recently was it sold—over 100 years after it was started. Such were the hardships of homesteaders. Such was their tenacity and strength. It makes me wonder what I have to complain about in my easy life? Looking back, they inspire me. And they humble me.//Nancy
Posted by Nancy Moser at 7:00 AM