Where Did They Get Their Simplicity Patterns?

When I was a teenager, “Mom” Pennell made my Easter outfit every year. (I contemplated inserting a photo of me in my favorite “Mom” Pennell creation, but regained my sanity.) A retired seamstress, Mom Pennell had worked for a wedding gown designer. He drew … she sewed. Mom could transform her employer’s drawings into a 3-D object long before CAD existed. My understanding of how she did that is that God the Creator gifted her to create by perceiving spatial relationships in a way that enabled her to combine a drawing with a woman’s shape (in her mind) and then cut a piece of fabric to fit that shape. 3-D geometrical talent applied to cloth. Of course Mom also had a dress form, and I always went for at least one fitting … just like 19th century dressmakers.

In the U.S., until Butterick began to publish patterns, fashionable clothing that fit properly was the purview of the wealthy. The rest of society either wore makeshift clothing that didn’t fit very well or hoped for hand-me-downs from someone higher up the income ladder. Aprons (a straight piece of cloth gathered onto a narrow piece of cloth tied at the waist) or belts often give shape to what was little more than a long, hemmed, sack. In this engraving of a maid in the 1750s, the softness around her neck is probably a square of cloth folded and draped like a scarf. The headgear? A circle (invert a pail, a basket, or a crock and you’ve got a circle pattern) gathered to fit around the head (measure with a length of twine to see how far to draw it up). I’m no seamstress, but I think I could manage.

Of course none of that was sufficient for women who were part of the growing “middle class” 19th century America. By then, a woman’s dress required buttonholes and darts and set-in sleeves. Enter (I think) the women like Mom Pennell who had the gift to look at the page and make it happen.

While the Civil War created demand for men’s ready-to-wear in the form of army uniforms, women would have to wait until later in the century (the 1880s) for much to happen in that marketplace (and then, of course, they’d still need the means to barter or buy). I know from reading western women’s pioneer diaries that they helped each other with their sewing needs. So I’m going to make an “educated supposition” that, if there was a Mom Pennell within twenty miles, she probably helped more than one pioneer woman with her dressmaking. (It’s also possible to de-construct a dress you like and use it for a pattern. Seam-ripper in hand, a pioneer woman could have taken a dress apart and used the resulting pieces as a pattern for years to come. Did they? I haven’t a clue … but I once did that with a beloved dress.) The brief research I’ve done on the history of dressmaking indicates that Godey’s Lady’s Book offered full-size patterns in the 1850s. When I learned that, I rushed to my bookshelf to check my 1875 Godey’s. Alas, no dress patterns that year, although pull-out fashion plates abound. 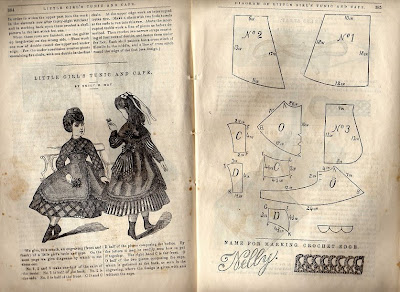 I did, however, find the pattern on the left in an 1869 edition of Peterson’s Magazine. How long do you suppose it took a woman to transfer the drawings into usable size ... and how did she make this "one-size-fits-all" approach work for her child? The brief instructions include the admonition that, “by the letters it may be readily seen how to put it together.” Oh ... really????

Mass-produced, sized, dress patterns came along thanks to Ebenezer Butterick. The family cut and folded the patterns by hand at first, moving into mass production by 1866. Millions had been sold by 1871. James McCall became a competitor. I enjoyed reading the Butterick company history here: http://butterick.mccall.com/butterick-history-pages-1007.phpphp.

Thanks to Vince for suggesting this topic. (Simplicity, by the way, was founded in 1927 ... I didn't know that!)

I, for one, have new appreciation for how easily I can don an "Easter outfit" if I so choose...although I am far more interested this year in snuggling my Easter grand-babies than thinking about new clothes! Here's the First Arrival with his big sister ... hours after his April 14 arrival. The next Easter baby is due any day now ... she and her cousin will be in the same church nursery soon. 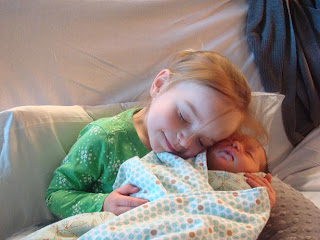