My Chateau of Inspiration

The nice thing about writing fiction is that I have some leeway to use a place that is real as inspiration, without using it per se. That’s the case with the Chateau-sur-Mer in Newport, Rhode Island, the summer playground of the wealthy during the Gilded Age.

When I saw this house in Newport, I fell in love. It stands on a green hill, grand but not haughty, elegant without being cold. Until the Vanderbilts started building their mega-mansions in the 1890’s, it was the palatial mansion in Newport.

It was first built in 1852 then remodeled and added onto, twenty years later. It was built for William Shepard Wetmore who made his fortune in the China trade. Originally it encompassed 35 acres and had a sea-view. But later, some of its land was sold (and the Breakers built upon it), making this “castle on the sea” landlocked. William and his wife once had a party for 3000 in the house!

When William died in 1862, the house passed to his son, George, who eventually became the governor of Rhode Island (1885-1887), and a state senator (1894-1912.) He hired Richard Morris Hunt to transform the house—which Hunt did, starting in 1871. He changed it so much that many people thought the original house had been torn down. Hunt later was the architect on the Vanderbilt’s Breakers and Marble House.

I include Mr. and Mrs. Wetmore at a dinner party in Chapter 13 of my book. A little ironic twist that they are guests in the fictitious Langdon mansion inspired by their very real home. 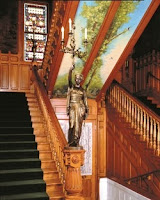 There are five areas of Chateau-sur-Mer that I used in An Unlikely Suitor. I am very partial to wood trim (you would know that if you saw my house), so the paneling of the grand entry really spoke to me. Plus, the stained glass and skylight are stunning. I had great fun writing a scene where my immigrant seamstress character, Lucy, first walks into the house.

The second room I used was the French parlor—that I called Mrs. Langdon’s morning room. It’s notable because the wood paneling of the rest of the house is present there too, but Edith Wetmore had it painted white. As a lover of wood and its grain I cringed. But it’s a very feminine room in a very masculine house.

Third, was the Butternut Bedroom. I made this the bedroom belonging to my main character, Rowena. She’s very warm and unassuming, and I felt the color of the butternut wood suited her, and was a contrast to the formal, assuming, white morning room preferred by her mother. 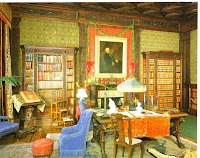 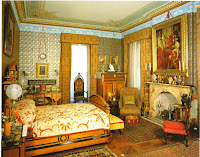 The Library was another room that inspired a scene, a confrontation between a poor girl in want of a book to read, the heir, and a butler. I have a library in my house, with lots of wood and shelves, so I love this type of room.
Lastly, the back of the Chateau had a porch facing the sea. I created a scene that had Rowena painting a landscape on the porch, and it was also a place she could go to contemplate the drama in the book. (Note: these wonderful interior photos are from a great book about the mansions of Newport by the Preservation Society of Newport County: Newport Mansions.)
I added a room-sized dressing room for Rowena, and stables and outbuildings, as needed. But the spirit of the Chateau lives on in my fictional Porte au Ciel: Gate to Heaven.
When I visited Newport in 2005, the Chateau-sur-Mer was undergoing a restoration but is now open to the public. It’s on my to-do list. After all, the house and I have become very close.//Nancy
Posted by Nancy Moser at 7:00 AM