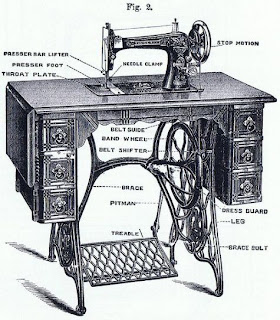 I wax nostalgic when the topic of treadle sewing machines comes up, because .... I learned to sew on one. At Clark Junior High School in East St. Louis, Illinois, we had an entire row of them in the Home Ec classroom, and that's what we used to create our fully lined black wool sheath dresses, and our two-piece wool pants suits. Pedal-pedal-pedal-pedal! In 1963-4. (And then of course we climbed aboard the covered wagon to go home. Uphill. Both ways. In the snow.)

For years my Grandmother's treadle sewing machine was part of our home decor. (Grandma Rose was Grandpa's sixth wife, but that's a topic for another blog. Or not.) I remember the drawers still housing all the attachments, and how I wish I had Grandma Rose's machine back...I'd probably use it! 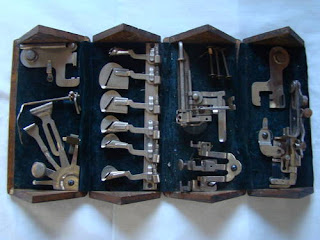 As Nancy reminded us a few posts ago, the sewing machine changed women's lives forever. Reading her blog reminded me of some anecdotes I've come across in my studies of 19th Century Great Plains women.

In 1867, a Nebraska pioneer woman wrote, Didn’t this sewing machine help me long fast. I never mean to sew by hand any more if I can help it.

In 1878, Nebraskan Mattie Oblinger wrote about her Mother's sewing machine back home, "I wish I was near enough for awhile to do some sewin' on. I have so much to do I do not know where to commence." Later that same year she wrote, "I had to make some new clothes for the girls to wear to the fair, and I was very much hurried as I done it all by hand. Mother, I often wish I was close to your machine for three girls makes lots of sewin'."

Iowa farm wife Emily Gillespie was so thrilled to get a sewing machine, she wrote about it in her diary. I finished Henry’s clothes, took me just 49 hours to make coat, pants, and vest. "Just 49 hours" .... Oh my.

Nebraska sod house homemaker Luna Kellie wrote, J.T. had bought me a new Singer Machine and I made good use of it making all the clothes we all wore. I had done this before by hand only occasionally taking some long seams down to sew on Mrs. Strohls machine. Machines were not so high then I think we paid 30 or 35 dollars for it.

At least J.T. wasn't like one husband I read about who said that he thought that twenty or twenty-five dollars was a lot of money to pay for a machine that did "little more than lighten a woman's work load." Where do you suppose he's buried :-). 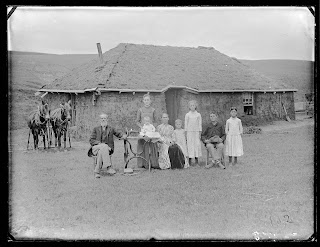 Ranch wife Grace Snyder had been married four years before she saved enough to buy a sewing machine by raising an orphaned calf. Imagine her joy when her husband returned from a supply run to town with that machine in the wagon ... and imagine her disappointment when they discovered he'd only brought the cabinet! The machine head, shipped in a separate crate, was still back at the train depot with the rest of the load. It would be a few days before the working part arrived! 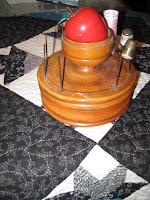 For all the advances in women's sewing tools, I still think there's something to be said for the soothing monotony of hand stitching. I have a wonderful sewing machine and a Featherweight, but I still love to thread a needle (the thread spools perch on this antique thingy (what's it called?) and stitch by hand. And I honestly believe that our pioneer foremothers enjoyed it, too--in spite of all they had to accomplish. There is great satisfaction at looking at a bit of needlework and saying, 'I made that." Dinners get eaten, cookies disappear, laundry just has to be done again ... but stitching? Stitching often outlasts the hands that do it.

Posted by Stephanie Grace Whitson at 7:00 AM