Visit the past and
see justice prevail. 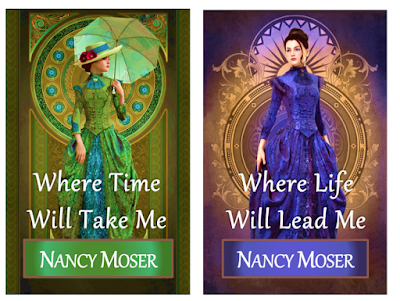 I'd like to introduce you to the  The Past Times series. I liked the idea of the "present" being in the past, so these two books are set in 1878 and 1879. The main character goes back in time from there, facilitating God's justice. Psalm 36: 6 says, "Your righteousness is like the highest mountains, your justice like the great deep."  God uses my character, Justine, to showcase His wonderful attributes. Here's the gist of the series:

Stand up for what is right, no matter the cost. 1878: Frivolous New York socialite, Justine Braden, receives the gift of time travel on her twentieth birthday--as have past generations of the women of her family. Such a gift presents her with a great purpose, one that is far beyond her imagining: justice. The gift is given, but it can be declined, ignored, or embraced. If she is strong enough, brave enough, and noble enough, the gift will facilitate justice and change many lives for the better. Join Justine on her journey from a fickle girl into a woman of great purpose and potential.

Where Time Will Take Me takes place in New Hampshire where Justine is sent back into Colonial America. Book 2: Where Life Will Lead Me has Justine living in Lawrence, Kansas where she explores frontier life and the Civil War.

I live in Kansas, so was excited to delve into its history. One of the historical events I have Justine visit is Quantrill's Raid in Lawrence during the Civil War. First, you need to understand the animosity between Missouri and Kansas at that time. The people who traveled westward were independent people—an admirable trait. But many came to flee their own crimes, or because their views conflicted with established society. Those who settled in Missouri tended to have Southern roots, were often sympathetic to slavery, and had plantation-type farms. For the most part, those who settled in Kansas had Northern roots and opposed slavery. Sometimes opposing sensibilities were as close as the next farm. And so there was conflict—sometimes horrendous, violent conflict. Hence the term "Bleeding Kansas". 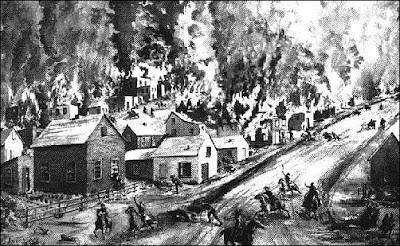 Quantrill’s Raid was the most violent conflict between Missouri Bushwhackers and the Kansas Jayhawkers. William Quantrill was a guerrilla fighter from Missouri whose gang of bandits chased after escaped slaves and terrorized anyone who had Union sympathies. On August 23, 1863 he led a raid from Missouri into Kansas to attack the free-state stronghold of Lawrence. Four hundred men rode into Lawrence before dawn. They were told to shoot any man--or boy, who was big enough to hold a gun. The raiders carried American flags as cover until they got close, then brandished Quantrill’s black flag. They killed nearly 200 men and boys, and burned most of Lawrence to the ground, causing $20-30 million in damages (in today’s money). They rode back to Missouri and didn’t lose a single man. 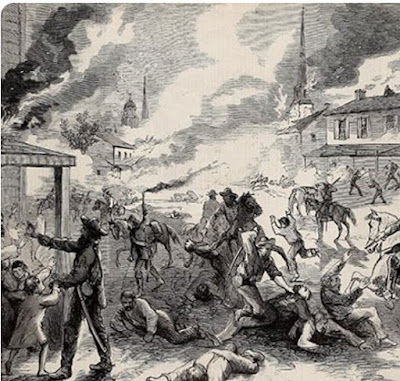 Why didn't Lawrence fight back? Their defenses were down. They'd spent years being told they were susceptible to an attack and had armaments ready. But when years passed and nothing happened they let their guard down. Unfortunately, with great consequences.

As we know, the pro-slavery side lost the war. Quantrill and his band of men (which may have included Jesse James) spread out and became outlaws, robbing and murdering innocents. Most died a violent death.

I hope you dive into Justine's story as she seeks justice!

Thanks for stopping by! I'd love to hear from you. Happy reading!
Posted by Nancy Moser at 7:38 AM No comments: