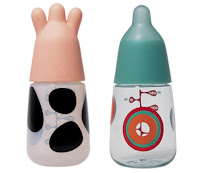 Nancy:  My husband and I just experienced the joy of the birth of our fifth grandchild last spring. We’re very blessed that all the kiddos live in town and we have the chance to take care of them. But taking care of babies when we’re nearing sixty…


I am amazed at all the different bottle options out there, from the tradition bottle, to ones that are bent at an angle, to those with disposable innards, etc. Formula containing iron, lactose free...


When I was writing my novel, Masquerade, which was set in 1886, I had to do some research about bottles and milk. Was milk available for purchase in the poorer areas of New York City? And what did bottles look like?


Turns out the issue of getting milk into a baby—when the mother couldn’t nurse—has always been an issue. In medieval times, babies drank from a hollowed out horn.  Later on, there were "pap feeders" made of porcelain.  And "pap" was often boiled water and flour.  Sometimes bread or egg was added.


In the mid-1800’s cow’s milk was shipped in wood barrels and would easily spoil. It was a dairy farmer by the name of Gail Borden who did something about it. He was sailing home to the USA from Europe, when they encountered rough seas. The cows on the ship got seasick and wouldn’t make milk—I never imaged that was possible. The babies on board were crying from lack of milk. Personally, when I look at situations like this, the odds of getting a dairy farmer with foresight on a ship in a storm, with cows that couldn’t produce milk . . . it leads me to know that the entire situation was God-arranged.


When Borden got home he started doing experiments with milk and found that it was 87% water. If he boiled it down in an airtight pan, he came up with a condensed version that was resistant to spoilage. On the way to Washington D.C. to get a patent, he met up with a wealthy grocery wholesaler, and together they canned it and tried to sell it. In 1864, the Eagle Brand Consolidated Milk company was formed.


Canned milk was not a huge success. During production, essential fats and nutrients were lost, and people were used to a more watery consistency and a white color (to get the white color, chalk used to be used!) But Borden persevered, and the Civil War was a boon to his business as the troops were sent condensed milk as part of their rations. At one point during the war, Borden produced 300,000 gallons of condensed milk at his Elgin, Illinois plant. It seems that this milk was not a beverage, but just a condensed form of the milk product.


In 1885, John Meyenberg, an immigrant from Switzerland, was producing the first evaporated milk at his Helvetica Milk Condensing Company plant. Soon after, Eldrige Amos Stuart developed a way to process canned, sterilized evaporated milk. By the end of the century, he partnered with Meyenberg and supplied Klondike gold miners milk in 16 ounce cans.


As the twentieth century began, homogenization was implemented, and in 1934, Meyenberg’s company (now the Pet Milk Company) added Vitamin D to their evaporated milk by a process called irradiation. He exposed the milk to ultraviolet light, which created the vitamin (amazing!)


So… canned milk was available for purchase. But what then? How did you feed it to the baby?


Ceramic or porcelain bottles were used in the 19th century, with a piece of cloth or rawhide stuffed into the end for the baby to suck upon. Preserved cow udders were also used. (yuck!) But these containers were hard to keep clean. Bottles became a little more sanitary when glass blowers began to create actual bottles for this use.


In the 1840’s vulcanized rubber came about that made rubber nipples possible. But the smell was horrible, and they were not widely manufactured.


In the 1880’s a type of bottle was created that was advertised as the way to feed your baby. Once the craze caught on, everyone and their brother had their own version of this bottle. It was marketed by many names including “Mummies Darling” and “The Princess Alexandria” (she was the Princess of Wales at the time and was very popular.) But in spite of the marketing, this bottle was a baby killer.

It consisted of a glass tube that held the milk, that had a stopper on it. A length of rubber tubing went from bottle to a bone mouth shield, and a rubber nipple. The big advantage was that the baby could feed themselves, even before they could hold a bottle. The disadvantage was it was impossible to keep clean and children died. Considering only two out of ten children lived to age two, mostly because of hygiene issues, this type of bottle was a horrendous addition to a continuing problem. Even though doctors preached against it, this type of bottle was used into the 1920’s. It’s impossible to measure how many babies died because of the germs formed and left behind in these bottles.

Look at these photographs of babies using these bottles. How odd looking. And more than that, how odd that the parents would let a precious photograph be taken with their baby sucking on one of these. It would be like having a formal picture of your child with a pacifier in its mouth. That first picture of the little boy . . . he looks drugged.

1894 brought a breakthrough that carried the bottle into the 1950’s. A “double-ended” feeder invented by Allen and Hanbury. It was glass and had a nipple on one end and a valve on the other that allowed the milk to flow continually—and made a full cleaning possible.


I was born in 1954 and my bottles were also glass and the usual procedure was for mothers to sanitize the bottles and nipples in boiling water. Then came plastic bottles, and when we fed our three kids (in the late 1970’s to mid-1980’s) I used the Platex nurser (“Most like mother herself”), that had the disposable bags. When the grandbabies came along, I was rather surprised to find that the disposable method had been re-replaced with plastic again.


It’s said that whatever's old is new again, but hopefully, never again with certain baby bottles of the past.//Nancy