Did you know Mozart had an older sister who was just as talented as he was?  But because she was a woman she didn't have a chance to fully utilize her talent.

I heard these two facts a few years ago when I was touring Mozart's house in Salzburg, Austria.  Even though I was on tourist overload, I remembered them, and, long story short, ended up writing a biographical novel, Mozart's Sister.

What's a biographical novel--or bio-novel, for short?  In my case, I define them as novels that are factual (as much as I can make them so) but read like a novel.  It's a chance for my ladies-of-history to speak, to tell their life-stories.
﻿ 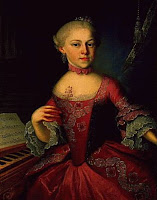 Nannerl Mozart was five years older than her little brother, Wolfgang.  Their father, Leopold, worked for the archbishop in Salzburg, Austria, with the music program at the cathedral. His talent went beyond music, to being able to see talent in others--in his son and daughter.

And so at the age of 5 and 10, Leopold and his wife took their children on a grand musical tour, to Vienna, Paris, London, Holland, Germany... They performed before royalty, in castles and palaces.  Beyond the normal music, they did tricks like playing with a cloth over the keys. The aristocracy of Europe loved them.  Their father readily accepted gifts and payment, though what they'd receive as compensation--and when they'd receive it--was a surprise. 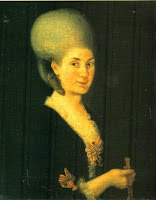 But then . . . they grew.  What was magical as children became less so as adolescents.  Leopold began to lie about their age.  Imagine being a young girl, blossoming into a woman and not being able to take joy in it because because the simple act of growing up annoyed her father and cut into the family income.

While Leopold struggled with money, status, and his own delicate ego, Nannerl was literally left behind.  With money tight, and the children's star waning, their father focused on the son alone.  Even though Nannerl could compose and was an expert at accompanying--without music--there were no women composers, so she was not encouraged.  Women were supposed to take care of the home, get married, and have babies.  He used her talent as long as it made him money, then pushed her aside.
﻿
As for the other woman in the Mozart family? Nannerl and Wolfgang's mother, Maria Anna, was virtually a footnote to history.  She lived, she bore these talented children, but then she died in Paris while being a reluctant chaperone to her teenage son who considered her a bother.


I often think about women in history, and the roles they were forced to play. Not that being a wife and mother isn't admirable (I enjoy both roles!) but to not have any choices . . . that's what I find sad.  Consider your own talents and ambitions.  What if they had no outlet? What if you were discouraged from developing them to their fullest potential?  I wouldn't take that well. Yet if a choice wasn't even an option . . . perhaps it was easier for these women of the past. Their roles were clear.  Today, our roles are the ones that can grow fuzzy and complicated. Perhaps they didn't mind?
﻿

I think it was hard for Nannerl because she was shown the world and was initially encouraged in her music.  To have all that taken from her would be more painful than never having it at all.


And yet, I do believe she found happiness and fulfillment--though not as she expected. Isn't that often the way?  When one door closes we are usually given the chance to find another path toward our purpose.  Rocky roads are not impassable, they just take an extra dose of determination.

Read Nannerl's life-story in Mozart's Sister available in eBook and print on Amazon. A new Bonus Edition is available, that includes 50 additional pages of Fact or Fiction, explaining more of the history of Nannerl and her family.  Her father insisted that they keep all their correspondence, so I was often able to use their own words in the telling of the story.  How better to hear a family's history? Also included in the Bonus Edition are extensive Discussion Questions for book clubs. Want to read an excerpt? Click HERE.

If you'd like to read about other women-of history, check out my other bio-novels:  Just Jane (Jane Austen), Washington's Lady (Martha Washington), and How Do I Love Thee?  (Elizabeth Barrett Browning.) //Nancy