A Symbol of our Freedom for Veterans' Day 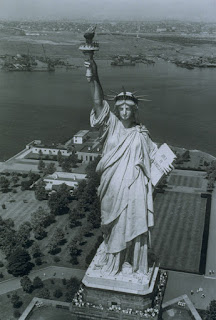 On this Veterans Day we thank all our veterans who have served to protect and defend our country.  My family has had a long line of veterans, from my dad in World War II, to a grandfather in World War I, to two great-grandfathers in the Civil War, and another "great" fighting in the Revolutionary War.  God bless America!

Thinking of Veterans ignites a swell of patriotism in my breast.  And the symbol of what our country stands for is the Statue of Liberty.

A month ago she celebrated her 128th birthday...

October 1886.  As we all learned in grammar school, the Statue was a gift from the people of France to the people of the United States, to celebrate the friendship between the two countries that was started during the American Revolution. Basically, if it weren’t for France sending ships and men to help our cause, we all might be talking with a British accent.

The Statue was supposed to come about in 1876, to commemorate the centennial of the Declaration of Independence, but funding issues—on both sides of the Atlantic—made for an ten year delay. The deal was, France would give us the statue and assemble it, and we would build the base to put it on. ﻿﻿﻿﻿
﻿  ﻿ ﻿﻿﻿﻿﻿
﻿﻿﻿﻿﻿
﻿

To spur Americans to donate, Joseph Pulitzer (of the Pulitzer Prize) used his newspaper, “The World” to shame people into giving. He got after the rich for not giving more, and got after the middle class for relying on the rich to do the giving. It worked.

﻿ The sculptor was Frederic Auguste Bartholdi, who asked Gustave Eiffel (the designer of the Eiffel Tower) to figure out the iron framework underneath the copper plating—which was only 3/32” thick.
﻿ ﻿
The Statue was put together in Paris, dismantled into 350 pieces, and packed into 214 crates. Parts of the statue were displayed in Paris during the construction. It took four months to put it all back together.﻿
﻿﻿
﻿﻿The presence of the Statue in the harbor--Lady Liberty greeting the influx of millions of immigrants--made her evolve into a symbol of freedom and hope. In 1883, Emily Lazarus wrote the poem “The New Colossus” for an auction to raise money for the pedestal. Only after her death was the poem married with the Statue. Since 1903 the poem has been on a plaque at the foot of the statue.

Not like the brazen giant of Greek fame,
With conquering limbs astride from land to land;
Here at our sea-washed, sunset gates shall stand
A mighty woman with a torch, whose flame
Is the imprisoned lightning, and her name
Mother of Exiles. From her beacon-hand
Glows world-wide welcome; her mild eyes command
The air-bridged harbor that twin cities frame.
"Keep, ancient lands, your storied pomp!" cries she
With silent lips. "Give me your tired, your poor,
Your huddled masses yearning to breathe free,
The wretched refuse of your teeming shore.
Send these, the homeless, tempest-tost to me,
I lift my lamp beside the golden door!"


Enjoy the photos, and remember all she stood for—and has come to stand for.//Nancy
Posted by Nancy Moser at 9:58 AM