A Romantic Stroll along a Cliff 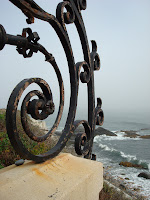 The Cliff Walk… doesn’t it sound like the perfect place for a romance, or a Gothic tale? That’s one reason I chose it as an integral element in An Unlikely Suitor. Walking along its 3.5 mile length with my husband conjured up images of Newport in its prime, during the last half of the 19th century… 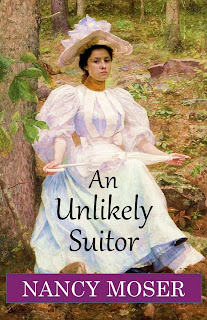 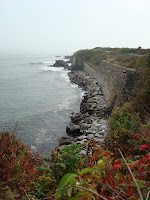 The nice thing about nature is that the basics remain the same. And so the essence of the Cliff Walk remains much as it was so long ago. Considering Newport has been around since 1639, the original paths along the shore of Rhode Island Sound and the Atlantic were probably originally worn down by deer and the Narragansett Indians. When European settlers lived there, they would go down to the rocks to recover goods from ship wrecks.

For the sea could be harsh and the rocks along the shore were (and are) jagged and dangerous. Yet there’s something very exciting about walking on a narrow path with civilization on the one side, and the fierceness of nature on the other. Standing on the Walk, looking out to sea, the centuries fall away and you feel a connection with all that came before. 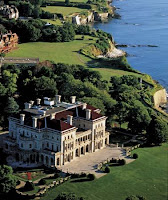 Newport began to be a summer haven of wealthy New Englanders as far back as 1850. As is the way since time began, people liked having a home with a view, and so homes were built along the edge of the ocean. As the century progressed, the first homes were replaced with palatial mansions that had grounds rivaling the lush estates of Europe. Instead of merchants and politicians building there, the extraordinarily wealthy “Robber Barons” of the Gilded Age took over: the Vanderbilts and Astors built summer “cottages” that were as large as twenty homes.

﻿﻿
The Cliff Walk was a place for all classes. Although the wealthy lived along its edges, the servants who worked in those houses were free to use the Walk. At the north end are the 40 Steps. Here’s a photo of the wooden steps taken during that olden time. The steps ended on the rocks. It was a gathering place for the working class who would have parties where they’d dance and sing Irish music. Since that time, the steps have been improved, from wood to more sturdy stone.﻿﻿﻿﻿

As the Walk gained in popularity, improvements were made a little at a time. Now, most of the Walk is paved, though there are still areas where you are virtually walking on rocks. But in the 1890’s (the era of my book) it was a more dangerous place and every year there were accidents and even deaths. I’ll leave it at that…

﻿﻿﻿﻿
What did the rich home owners think about the lower classes walking within a hundred feet of their back porticos? They were not amused. At various times in history, the homeowners tried to restrict access. At one point they even dropped the Walk 12’ below the land-line so walkers couldn't see their houses. They’d plant bushes, put rocks in the way, or even use guard dog.﻿﻿﻿ 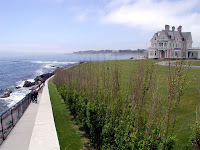 But many embraced the merging of their property and the Cliff Walk and made improvements, including nice walls to sit upon and bridges. The bottom line is the walk is a public place and all are welcome to embrace its beauty and honor its history. Go to Newport and take a walk.  You won't be disappointed.//Nancy

How Much Things Cost--Then and Now

How much does it cost? It’s an oft-used phrase, an oft-asked question. The cost of living affects every part of our lives. We make choices based on an item’s cost.

I’ve always been fascinated with how much things cost in the past. Much of the time, the items seem ridiculously cheap. And yet . . . and yet . . . when taken in relation to income, often what seems cheap isn’t. 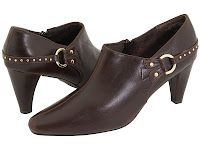 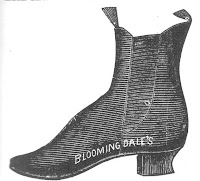 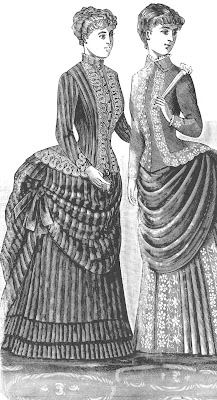 The day dress on the left—with a lot of embellishments—cost $4.75 in the Bloomingdale’s catalog. The one on the right, with a lot of lace, was $12.75. Although it’s hard to find a present-day outfit that uses an equal amount of yardage or trim, if we take the 1886 price x 24, that brings up a modern-day cost of $114-$306 for an outfit with a lot of detail. Again, not out of line. 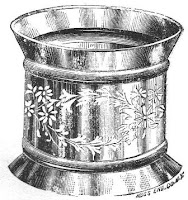 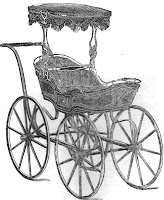 A baby carriage cost $11.50. Now? A collapsible stroller with extra storage and cup holders costs $249. Close to the $276 inflation number. 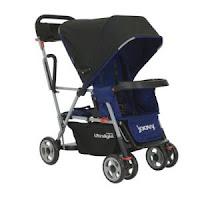 So where is the discrepancy in what things cost then and now? Or is there one?

A basic not-so-nice apartment rented for $15/month. Times 24 = $360. Can people find any type of housing for $360/month anymore? And only the rich owned carriages while almost everyone now owns their own car.

The cost of living in 1886 was pretty basic: lodging, food, and clothes. No charges for cell phones, computers, cable TV, air conditioning, internet, insurance, gasoline . . .  And no income tax or sales tax.

We have more to spend our money on nowadays. More bottom-line items in our monthly budgets. Our lives are more varied and comfortable. And complicated. But we work shorter hours, spend more time and money on entertainment and recreation, and have something most 1886 people did not:  FREE TIME. We have more options in every aspect of our lives. Is that a good thing? Are we happier?

It still comes down to the fact that money—and buying things—shouldn't be the source of our happiness. The things that have no monetary cost are the things that are priceless: our family, friends, faith, and freedom//Nancy Moser

A post about Labor Day
by Stephanie Grace Whitson

How did your family celebrate Labor Day this past Monday? Were you able to spend the day the way you wanted to, or did someone in the family have to go to work? I was racing toward a September 15 deadline, and so I worked. But I did take a few minutes to learn a bit about the origins of Labor Day. I didn't know that it was a result of the "Labor Movement" at the end of the 19th century, and that it became a national holiday in 1894.

The American Worker deserved to be celebrated. Long hours and what we call “sweat equity” did a lot to develop the tradition that a strong “work ethic” is a virtue. But along the path to developing a healthy work ethic, there were many missteps that the Labor Movement would address over the years. 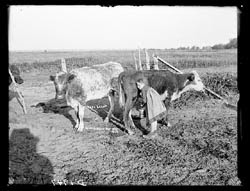 Child labor was one reality that needed changing, and it raised issues that weren’t necessarily “black and white.” After all, any child raised on a farm will tell you that they learned to work hard and long at a young age, because farming families work together. Children can provide meaningful help, and they feel good when they contribute to the family. That’s a good thing. But prior to the enactment of child labor laws, children could easily be exploited. During the Industrial Revolution, entire families often went to work in a factory where the “work week” was 68-72 hours long in dangerous conditions. Even after labor laws were enacted, they didn’t always apply to immigrant children. 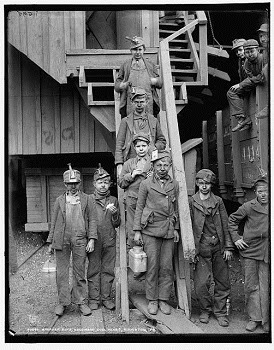 The photograph at right shows a group of "Breaker Boys," who were employed in the coal industry early in the 20th century. According to a 1902 study, nearly 18,000 persons were employed as slate pickers in the anthracite coal industry. "The majority of these are boys from the ages of 10 to 14 years."

“A picture is worth a thousand words,” and just as photographer Jacob Riis did much to call attention to the plight of immigrants in the city of New York, so did a photographer named Lewis Hines do much to decry the plight of child workers when, in 1909, he published the first of many photo essays showing children working in potentially dangerous places. See some of his copyrighted work here: http://www.historyplace.com/unitedstates/childlabor/about.htm

Here’s a photo that reminds me to be thankful for the hard work of others. Because Grayson Irvin (shown here in the uniform he wore to work) spent long hours behind the wheel of a truck, hauling freight for Yellow Transit, I had a childhood free from hunger. I had the freedom to study and to get a high school diploma (Daddy never got beyond the 8th Grade, because he had to drop out and got to work to help feed his siblings).

I'll end this blog post on a happy note. The photograph on the right is my favorite "Labor Day" photograph. Why? Because in September of 1982, I labored (literally) to bring a little boy into this world. And here he is today...a hard-working husband and father and a superb fisherman. My truck-driving Daddy loved to fish. He'd be proud, and so am I.


Posted by Stephanie Grace Whitson at 3:00 AM 2 comments: