Pioneers and "the Glorious Fourth"

How's your summer going? I can hardly believe it's time for back to school sales ... and for me to have not one but TWO grandchildren old enough to start school. Where did the last six year go? But before school starts, we'll be heading to a family reunion "on the beach." While it takes some forethought to manage it, an eight-hour drive for fun isn't really all that unusual for today's families. Back in the 1800s, such a trip would be unthinkable. But that doesn't mean our pioneer foremothers didn't know how to party. July 4 was a huge day for Nebraska'a pioneers. 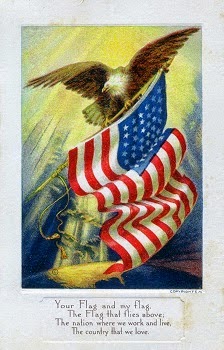 “Now, therefore, I, Silas Garber, governor of the state of Nebraska … do declare said county to be temporarily organized … this twenty-seventh day of June, in the year of our Lord one thousand either hundred and seventy-seven, and of the independence of the United State the one hundred and first, and of this state, the eleventh.” Thus was Custer County, Nebraska, officially created. It’s interesting that the 2,592 square mile county’s first official document references Independence Day.
Custer County was a hard place to eke out a living. Houses were built from the prairie sod, and homemakers waged a constant battle against fleas, frogs, and snakes. One early Easter Sunday, neighbors got together with guns, revolvers, rifles, spades, and garden rakes, and killed 133 rattlers. In one day.
Even in those early days, though, when towns were little more than a few ramshackle buildings squatting on open prairie, celebrating July 4 was an important event. Early photographer Solomon Butcher photographed one such celebration in 1886. You can see the photograph here: http://memory.loc.gov/award/nbhips/lca/290/2904v.jpg.
One pioneer woman remembered a basket dinner on her first Fourth of July—and the singing of patriotic songs by a chorus. She also mentioned “funny stories told to keep up our morale.” A popular song originally titled “The Beautiful Valley of Eden” became “The Beautiful Valley of Clear Creek” in honor of a new settlement.
Estell Chrisman Laughlin remembered the “hustle and bustle or preparation a week or so beforehand,” as mothers sewed new dresses for their daughters and cotton suits for their sons. Another woman reminisced, “Mothers spent days sewing, washing, ironing, making button holes, and sewing on buttons, starching and ironing petticoats as stiff as sunbonnets. We wore two or three of those petticoats, ruffles and all. We listened for the guns at sunrise on the Fourth of July morning. There were horse races and baseball games, dancing all afternoon and night, speaking, and other entertainments.”
Families arrived in town early to select a meeting place for dinner, which consisted of “great quantities of fried chicken, baked beans, potato salad, sandwiches, brownstone front cake, and gooseberry and raspberry pie—the contents of the pies having been diligently gathered from canyons and creek banks by children … Each housewife wished to impress the others with her culinary proficiency.” Sometimes the lemonade might even be chilled with ice, cut the prior winter and stacked in an ice house or barn, protected from melting for as long as possible by being covered over with straw and gunny sacking.
Mrs. Laughlin remembered a Judge Matthews who “reeked of tobacco,” but was popular with the children, “for he could write our named in red and blue fancy script on a little card which he decorated with a graceful winging bird holding a scroll in its beak.”


In the afternoon, the speaker of the day would “discourse in loud, stentorian tones upon patriotism and what our forefathers had done for us. Old Glory floated aloft in the hot summer air. The people sat about on plank seats, patiently listening and fanning themselves. … When the departing fingers of sunlight withdrew through the trees, there was a general roundup of children. We stowed ourselves into carriages, spring wagons, or lumber wagons, where we sat in all dignity on kitchen chairs, as we departed homeward, tired and happy after a glorious Fourth.”

I hope your summer has had some "happy and glorious" moments.
Here's one of mine (below)
Stephanie

Posted by Stephanie Grace Whitson at 9:23 AM