A couple of days ago, I (Stephanie Grace Whitson) shared a video on my personal Facebook page because I wanted the young women in my social loop to see it. I wanted them to realize that our culture sets impossible standards by creating beautiful women with technology and then "passing them off as real." I close this post with that video, but the reason it appears here on my history blog is this:  "the more things change, the more they stay the same." Girls in the 1860s used to starve themselves to get the utlimate compliment of being called "fairylike." Sound familiar? Looked at a runway model's figure lately? 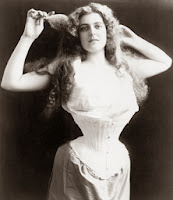 It has been thus in America since before the Civil War. In an era when tan skin was unacceptable, Thomas Jefferson wrote this to a devoted daughter: "Remember ... not to go out without your bonnet because it will make you very ugly and then we should not love you so much." Jefferson may have had a way with words when it came to authoring political documents, but I gotta say he could have used a little coaching when it came to communicating on the subject of beauty. Ahem.
In the 1860s, the ideal waist measurement was 20 inches. T-w-e-n-t-y. Of course fashion designers were happy to create corsets to help women achieve the ideal. And physicians were equally happy to express their outrage at what such nonsense did to a woman's innards. But just as it does now, the desire to be desirable and to meet impossible standards of beauty waged unending war with common sense.

According to Gail Collins, author of America's Women, "while virtually everything women read told them that corsets were bad, everything they saw stressed how essential they were." And it didn't end in the 1860s. After all, an 1880s woman wasn't going to achieve this: 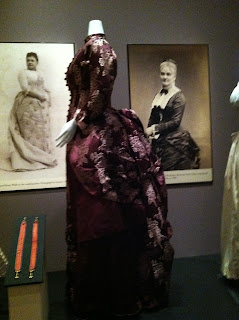 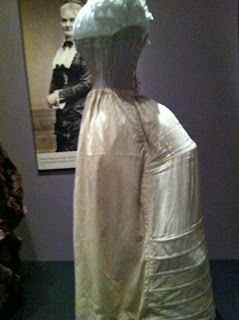 Harriet Beecher Stowe (1811-1896) wrote: "We in America have got so far out of the way of a womanhood that has any vigor of outline or opulence of physical proportion that, when we see a woman made as a woman ought to be, she strikes us as a monster ... Our willowy girls are afraid of nothing so much as growing stout ..."

Did your mother wear a corset? I was born in 1952 and advertising copy back then mentioned that "every woman has a figure problem."

And so it goes. The older I get, the more I struggle with the impossible standard. After all, at 79 Sophia Loren "rocked" the red carpet.

The more things change, the more they stay the same. Civil War ladies didn't want dark skin, but today we try to achieve it with everything from beach days to tanning beds to spray-on foam. So what is considered "beautiful" does change ... but the role of advertising and impossible standards in our quest isn't new.

As a wise man from the East once said ...

"That which has been is that which will be,


And that which has been done is that which will be done.
So there is nothing new under the sun."


Posted by Stephanie Grace Whitson at 6:12 PM No comments: