A Mourning Event, Part I

"I'm going to a mourning event this weekend ... wanna come?" 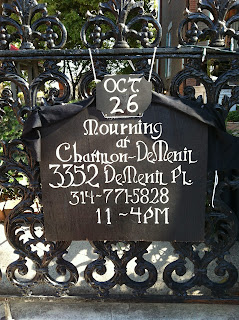 Not an invitation you hear often, eh? But when I saw news of the event on the web site for the Chatillon-Demenil House in St. Louis, Missouri, I was intrigued. I'm always interested in historic mansions, but I'd never been to a "mourning event." I have, however, had to research mourning customs, most recently for my book The Shadow on the Quilt. I'm very glad I made the effort to go. The event was well planned and very informative. I found it fascinating.

Attendees were welcomed with the sign at the right placed on the wrought iron fence that borders the back of the property. Friends and fellow authors Judith Miller and Nancy Moser and I purchased our tickets and made our way up the sidewalk that ran alongside the house toward the front door. Why did we go in the back way? Well, the front of the house looks out on an access ramp to an interstate. It's sad that the house just barely escaped being razed, and that "the view" isn't exactly inspiring. Still, the mansion was saved and it's cared for by a group of dedicated people. 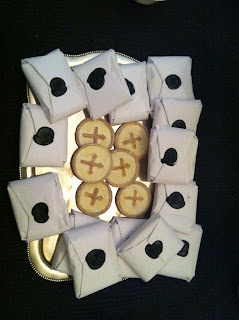 Each room of the house was dedicated to a certain aspect of Victorian mourning. First, we met a widow in the first stage of mourning. Then we moved into another room where a widow in the second stage of mourning showed examples of mourning stationery and other ephemera. The dining room table was set with mourning china, complete with a tray of funeral biscuits. In the upstairs hall, another mourner told us about one of the great enemies of children in the 19th century--diphtheria. In another room, a nurse shared some of the things she'd used to treat an ill patient and warned us of the importance of keeping a button on our person at all times, so that if a funeral procession happened to pass by, we could hold onto the button and keep Death from stalking us. Mary Todd Lincoln shared her experience with grief. Back on the main floor, the undertaker greeted us in the formal parlor. Each reenactor seemed very well informed, and I learned something new from each one--and came home with a new appreciation for how different things were in the 1800s, when saying good-bye to loved ones was based in the home.

The plate at the right is an example of the mourning china that was on display in the dining room.

I didn't know such a thing existed!

Commercial bakeries often vied for the "funeral biscuit" business ... just as they competed for wedding cake orders. In some areas, biscuits were distributed at the funeral luncheon or supper. In other parts of the country, they were delivered to family and friends as a way of sharing the news of a loss. Printed memorials were sometimes used for the wrapping paper, the packages closed with black sealing wax.

Overall, this was a fascinating and informative event. The next time I have to kill off a character, I'll know more about how that would have affected the survivors--well, the wealthy survivors, anyway. The "middling folk" wouldn't have been able to participate in such elaborate ritual.

In 2013, we sometimes lament the commercialization of holidays. In the late 1800s, furniture makers, florists, printers, bakers, dressmakers, musicians, stone masons, tailors and more all created product to support an entire industry. Mourning was big business. There is nothing new under the sun.

Posted by Stephanie Grace Whitson at 6:00 AM 2 comments: