The Roots of a Dream: The Transcontinental Railroad

Just released is my novel, The Journey of Josephine Cain, which places a spoiled rich girl from Washington D.C. smack dab in the middle of the building of the Transcontinental Railroad after the Civil War.

It’s 1866. The Civil War has ended. Tens of thousands of war-weary soldiers need work—and beyond that, a purpose. They long for inspiration and a way to feel united again, a way to feel proud of their country.


Enter the Transcontinental Railroad project. Up until this time, if you wanted to travel from coast to coast, you could take a train as far as Council Bluffs, Iowa or Sacramento, California. Then you’d have to get off the train and go overland by stagecoach or wagon train. It would take six arduous months over mountains, deserts, and rivers.


Before the war, in August 1859, Abraham Lincoln was in Council Bluffs to check on some land that was collateral for a debt, and met with Grenville Dodge where they discussed the possibility of a transcontinental railroad stretching to the Pacific. They stood together on a bluff and looked west, and Dodge (who would become a brigadier general in the war) made a case for going directly across the prairie of the Nebraska territory. Since there was no bridge over the Missouri River between Council Bluffs and Omaha, it was logical to start the project in Omaha. 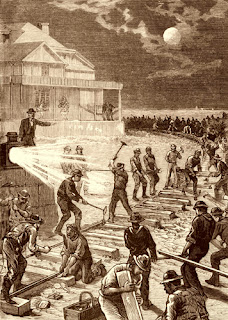 
Work started in 1865 and was completed in May 1869 at Promontory Summit, Utah. During those four grueling years ex-Confederate soldiers worked side by side with ex-Union soldiers—and ex-slaves. Imagine that. A year earlier they were killing each other. It’s astonishing. And it wasn’t just Americans who worked on the project. Tens of thousands of immigrants left their homelands to work on the railroad. On the Central Pacific line Chinese workers were the prominent work force, and on the Union Pacific, the Irish led the way. 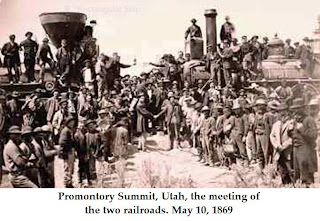 Men were paid varying wages according to their job: $2.50-4.00, or an average of $90/month. Yet the railroad deducted $20/month for food and board. The workers endured long days of backbreaking work, rough living conditions, harsh weather, and the threat of accidents and Indian attacks. Plus, as the railroads entered the Wild West, they came into contact with many people who’d come west to escape iffy pasts and held the law in disdain. Outlaws, shysters, murderers, and con men. Along the way, Hell on Wheel towns followed the crews—just like they’d followed the soldiers in the war—offering booze, gambling, and prostitution.


Why did the men do the work? It gave them food in their bellies, money in their pockets, and even more than that, pride in working toward something big, a project many called impossible. Because of their dedication and courage that six month trip from Omaha to Sacramento was cut down to a few days! 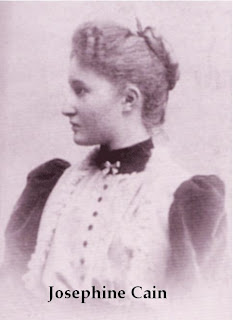 With all this drama and passion in the air it’s not surprising that a pampered general’s daughter from Washington D.C. would find herself a fish out of water. My character Josephine Cain has some choices to make when she is assailed with these rough experiences along the rails. She can choose to run home to what she knows, marry a family friend, and continue life according to the status quo. Or she can cower and be intimidated by the strange new world of the West. Or . . . she can be challenged by the possibilities, and tap into the strong woman she never knew she was. Guess which choice Josephine makes . . .


Come along on this amazing journey of discovery, courage, and faith and be a part of the American dream! 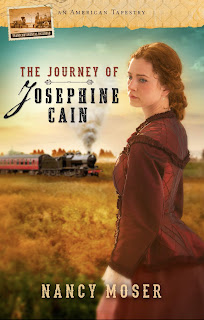 Read an excerpt from The Journey of Josephine Cain here.  Buy it at your favorite bookstores: Amazon, Barnes & Noble, or Christian Book .  It's available in paperback or eBook.

Check out Josephine's storyboard on Pinterest. and loads of 1860's fashion here!
Posted by Nancy Moser at 9:36 AM