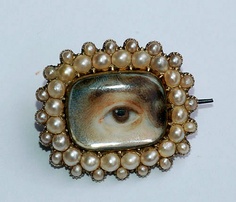 I was scanning through Pinterest (an addiction--at least I admit it) and saw some "eye miniatures". I had never heard of such a thing.  But apparently in the late 1700's people would commission a portrait of their loved one's eyes.  Or eye.  Just one.

The art was usually watercolor on ivory and was made into a brooch, bracelet, or ring. They're actually quite amazing.  If the eyes are the door to one's soul, then I can imagine wanting to capture that image for all time. 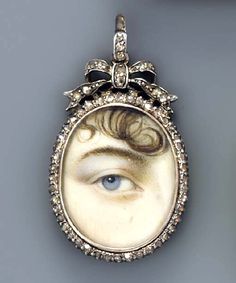 It's said that George III(England's king who wouldn't let the 13 American colonies go) had a mistress who gave him a portrait of her eye. Of course, when that's all there is in the portrait, it's hard to identify who the eye belongs to.  Quite perfect for lovers and mistresses, and hence they were called "Lovers' Eyes".  But eventually, it became a more sentimental keepsake for family members. 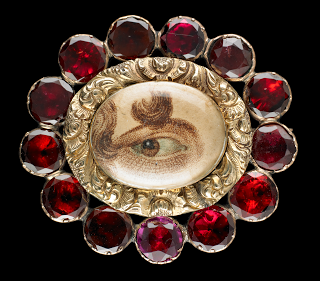 But beware the fake! Here's a fascinating article about it (and Antiques Road Show) here.

I also found a book about them. 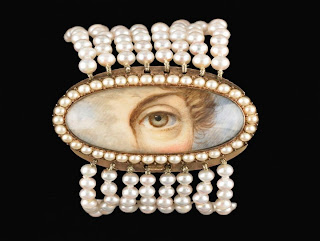 All these painted eyes seem quite lovely, but are missing one thing.

You can't convince me that none of the subjects had crow's feet.

Sorry.  Sometimes I'm just too practical.  Where is my romantic side?  Lost in the past, no doubt.

Take a look at my Pinterest board that has loads of Antiques and Vintage Fascinations. Check out these other links to the boards I have about fashion (from most every era), accessories, underwear and corsets, portraits, jewels, history that intrigues me ...  Once there, click on the boards to Follow me!  (saying that I feel like the character in the movie "Indiana Jones and the Last Crusade")

If you're new to Pinterest, let me warn you, it's addictive.  But in a nice way.//Nancy
Posted by Nancy Moser at 2:15 PM 4 comments: