The Craziness of Crazy Quilts 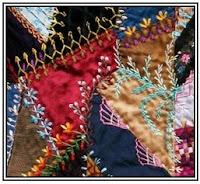 Have you ever tried to make a crazy quilt? I have. Zounds. It seems like it would be simple because the concept is to take odd-shaped pieces and put them together in any-which way you choose. Sounds good to me. Regular patchwork doesn’t always work for me because I’m not as exact as I should be.

Unfortunately, I jumped into crazy quilting like I jump into a lot of artsy-crafty projects that catch my eye and make me stupidly think "Hey, I could do that!" For instance, I have a whole set of lace-making bobbins and a pillow with the lace pins on it. That fad lasted about a week before I realized it was far easier and wiser to buy my lace by the yard. Then, since my dad carves and paints birds (even at age 93) I assumed I should have the same talented genes. So I bought some balsa wood and carving knives and hacked off the corner of the wood. One little corner.  My hands hurt at the effort.  It was harder than I thought! I also remember getting paint and canvas after I was inspired by Bob Ross (Mr. Happy Clouds.) I still have them. Only slightly used.
I digress. But as I dove into the art of crazy-quilting, I decided I was going to make a king-sized spread (I know, I know. What was I thinking?) I went to the fabric store and spent over $100 buying luscious fabrics in deep jewel tones. I bought a couple books on the craft, ones that offered me different embroidery stitches. For you see, along the seam of each oddly shaped piece of fabric, you’re supposed to embellish it with embroidery and beads and bits of lace. I bought $30 worth of floss and thread and a packet of needles.  You can never have too many needles. And why not one of those nifty cutting boards with a rotary cutter? After 50 years of sewing, it was time to move up from mere scissors. $60?  Why not.

But then, on the first day, I realized piecing together unusual, haphazard pieces of fabric was far from easy. It was hard to think in this abstract way. I gave it a couple more days, but I soon realized that I would be better off sewing together 3” x 8” rectangular strips and add my embroidery along those seams. So that's what I did.  For a short time. After creating about twelve blocks, I set it aside.
For now. Until the next surge of inspiration comes along.
But my experience with my ridiculously crazy quilt gave me the idea for a novella. The Bridal Quilt is just out in a Christmas anthology that I wrote with Stephanie Grace Whitson and Judith Miller. The book is called A Patchwork Christmas. Each novella revolves around the holiday and a quilt. Judith’s story is about the Amana colonies in Iowa, Stephanie’s is about Nebraska, and mine is set in 1880's New York City, during the Gilded Age. My character, Ada, is a wealthy ingénue and is making a bridal quilt out of all the lovely fabric scraps from dresses she’s worn since coming out into society. Ada’s quilt is a success.

﻿Good for her.﻿
Actually, good for me.  And you. Because included in the book are directions to knit Amana-style mittens, sew a patchwork doll quilt, and create a crazy quilt ornament like the one on the right  And there's a contest to win one of these finished pieces of crafty-artistry! Whoever wins this ornament better appreciate it because it took all my inconsiderable talent to make it.  Yes, I made it. And I'm giving it away.  See info about the contest here.   By the way, Lincoln Nebraska has an amazing International Quilt Study Center and Museum.  I heartily recommend it.  Awhile ago they had a display on Victorian crazy quilts.  Here's a link.  Browse through the rest of the website too.    Happy Creativity!//Nancy
Posted by Nancy Moser at 8:44 PM