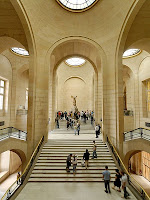 History lovers learn a couple of things fairly early on. One is DON'T TOUCH ... another is ASK before taking photos. I learned the last rule when I was a nineteen-year-old student standing atop this staircase staring with wonder up at La Victoire de Samothrace. Had Paul seen her on one of his journeys? I had to have a photograph. To remind myself that I'd been here. Happily, French docents seem less likely to toss a person out on their ear if they happen to be a pretty nineteen-year-old. I survived the scolding, but I had learned the rule. Never forgot it, either. 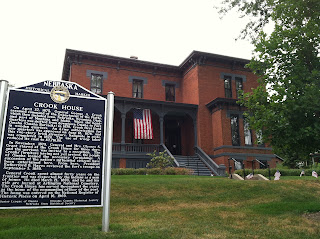 So imagine my amazement when I visited the gorgeous 1879 Victorian home pictured on the left a couple of Sundays ago and was invited to take all the photos I wanted to take ... to sit on the furniture ... so hold the teacup ... even to play the piano. The General Crook House at Fort Omaha, Nebraska, is heaven for the history-lover, and especially wonderful for someone like me who has to create imaginary worlds for her characters to inhabit.

The house would have been three-and-a-half miles outside of Omaha when it was built. "On the frontier," the docent explained. Presidents Rutherford B. Hayes and Ulysses Grant both stayed at this house (I'll show you the guest room in my next post).

I have authentic house plans ... books of them. But there is nothing like 3-D to get my imagination going. That wallpaper! That arched doorway! That silver tea set! That lamp! That chandelier ... and the fireplaces burned coal.  Now I know how my people heat their house.

I'll just share a few highlights, but if you are ever near this place and you love the Victorian era ...  you MUST GO. I'm going back at Christmas. Or before. Because it was impossible to see everything. I want time to savor. To close my eyes and imagine.

A step back in time ... although I wouldn't want to go back. I also saw the maid's quarters ... which is where I would have lived.

Well ... if you've checked us out recently you've seem one combination or another of ... a mess. So I've made the monumental decision to simplify and eliminate the chaos until we figure out the problem. We're back ... we just aren't as "pretty." Hope you stay tuned!
--Stephanie G.
Posted by Stephanie Grace Whitson at 9:05 AM No comments: