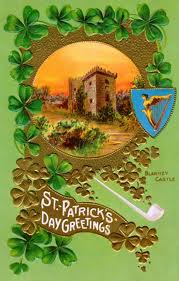 What little I know about my own heritage includes mostly Scots and Germans, but my brother-in-law is the official poet of the Higgins clan (for true) and so I've married into a family that has strong ties, although we haven't dyed any rivers green of late.

A few years ago, the family geneaologist (Grandpa Jack), his two sons, and his grandson did a tour of the Emerald Isle in search of family ties. At one point they began calling it the "No More Ruined Abbeys Tour," but they had a wonderful time and came home agreeing that it was an unforgettable journey that made them feel even more connected to their roots in County Clare.

I'm actually sitting in my office today sporting my husband's black SORT (Special Operations Response Team) T-shirt editing my next book in the Quilt Chronicles series, but I can't allow the day to pass without a nod to ancient history.

Here's a link that I found fascinating regarding who Saint Patrick was: 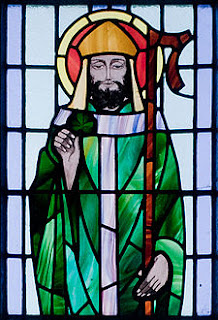 As to ancient history of the British Isles, I highly recommend Linda Windsor's book Healer, which takes place in ancient times and imparts an amazing amount of knowledge about the history of Christianity in the British Isles. I just finished it this week, and was moved to tears by some of the beautiful accounts of faith in action.

I've been fascinated by King Arthur and Camelot since the days when Richard Harris and Franco Nero were vying for Queen Guinevere's heart. That was 1967. It seems about ten minutes ago. Two years later, I wrote a research paper comparing Le Morte d'Arthur with The Once and Future King. The cover of that paper tells me that I wrote it for "English 8A" and turned it in on May 12, 1969:

"Volumes have been written about the reign of one King Arthur who, with his unpredictable Queen Guinevere, tried to create a new civilization at Camelot. And then came Sir Lancelot du Lake. The tragedy of the eternal triangle created when Guinevere and Lancelot fall in love has been interpreted by countless writers. Herein, Sir Thomas Mallory's Le Morte D'arthur, written in the 1400s, will be compared with T.H. White's The Once and Future King, written in 1939 ..." and so on for fifteen double-spaced typewritten pages.

Do you remember Franco Nero? He ended up married to the actress who played Queen Guinevere, Vanessa Redgrave. And I never forgot those blue eyes and enjoyed seeing them reunited in the film "Letters to Juliet" in 2010. Plucks at the romantic heartstrings, it does.