I'm weird, but it's my children's fault. Valentine's Day is about birthdays for me, because my two daughters greeted the world on February 14 and February 15, respectively. Of course the nice thing about that is that the men in their lives can "kill two birds with one stone"--and they shouldn't have a bit of trouble remembering their wife's/girl friend's birthday!

Knowing what you folks already know about me, you won't be surprised that I'm sharing a bit of the women's history behind Valentine's day today. It resonates with me because of some parallels between Esther Howland's life and my own when it comes to entrepreneurship. 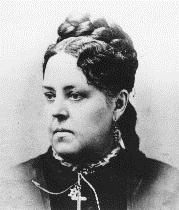 Esther Howland is credited by many with popularizing Valentine's Day in America. Educated at Mount Holyoke Seminary in Massachusetts (class of 1847), Rowland was a "woman with high color and glossy chestnut hair," who "drove high-stepping horses and looked like an aristocrat." She's about fifty in this photo--the only one I could find.

Apparently Esther had both an artistic eye and an entrepreneurial spirit, for when she received an English Valentine (her family operated a large book and stationery store) from one of her father's business associates, she thought she could do better. And so she did. She ordered supplies and made a dozen samples for her brother to take along in his sample book on his next sales trip. Her goal was $200 in orders. Imagine Esther's surprise (and, perhaps, sense of panic), when her brother returned with $5000 in advance sales.

This is where I smiled in reading her story. Back in the 1990s, I decorated a small plush bear and wrote a poem of comfort for a friend. A few bears went into the local Christian bookstore at the owner's request. From there, "Burden Bear" went into a catalog, but only after I convinced the person in charge that yes, I could fill an order for one hundred bears within ten days. Imagine our panic when suddenly the catalog had orders for two thousand bears. And then, a few days later ... two thousand more. Believe me, I can empathize with Esther Howland's feelings when her brother gave her the news of her great success. Success can kill a person!

With the help of some home-schooling Moms who became independent contractors for my bear business, we filled those orders and many more over the next few years--until Thomas Nelson Publishers offered me a book contract. I suppose I was following in the footsteps of women like Esther Howland, who rose to the occasion and created a production assembly line at home--with the help of several female friends. Soon, her cottage industry took over the third floor of the Howland home. Eventually the New England Valentine Company rented a building and even published a small book called The New England Valentine Co.'s Verse Book for 1879.

Esther Howland didn't invent the American valentine. She wasn't the first to make them, but she did popularize her own much-admired style. And she stands out to me personally in an era when women weren't expected to found businesses, and when many questioned their mental abilities when it came to such things. In 1881, Howland sold her business to George Whitney, which becames the largest valentine factory in the world.


Here's the little verse I wrote back in 1995 to accompany one of our Valentine's Day gifts.

Love is patient, love is kind,
When somehow wronged, love doesn't mind.
Love bears all things (I like that part)
And patience sets true love apart.
While only God loves perfectly,
His love has flowed through you to me;
I'm grateful for this chance to say
I LOVE YOU--Have a Happy day!