In Honor of Nebraska's African Americans

February is Black History month. I've always been fascinated by ethnic experience different from my own, and so I spent a few minutes gleaning some of Nebraska's African American history for this post. The stories suggested by the facts get this writer's overactive imagination churning. 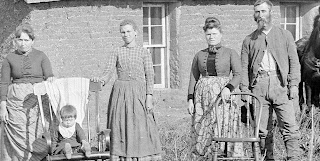 This family homesteaded in Custer County, Nebraska. A relative remembered hearing the story of her grandfather leading the first black "emigrant train" to Cherry County, Nebraska. He drove one wagon, a son drove another, and a sixteen-year-old girl drove the third. "She took care of her own team and greased the wagon wheels." What a woman!

A little more is known about Nebraskan Robert Ball Anderson (I couldn't find a photograph). He was born into slavery in Kentucky in 1843. His mother was sold when he was six years old, and he never saw her again. (How does anyone overcome that?) As a young man, he ran away from the plantation and joined the Union Army, serving in the 125th Colored Infantry. After a stint as a Buffalo Soldier in the west, Anderson settled in Butler County and filed on a homestead. A casualty of the grasshopper plague, Anderson moved to Box Butte County.  By 1918, he owned over two thousand acres. I often tell people that "what really happened is far more interesting than anything I could make up." Folks are always surprised when I mention that my maternal grandfather was 44 when he married my 22-year-old grandmother (so am I). Mr. Anderson's story is even more unique. In 1922, 79-year-old Robert Anderson married Daisy ... a 22-year-old young woman from Arkansas. Daisy died in 1998 ... a Civil War wife. Think about that for a minute! 1998. A Civil War wife passed away. Speaking of her husband in a recorded interview before she died, Daisy said, "I never had anything in my life. He wanted to make my life better." I couldn't write that novel, because no one would believe it ... but it happened. Would I have survived losing my mother at the age of six in the way Robert Anderson did? Or would I have just given up? Would I have had the courage to run? Would I have regrouped after grasshoppers destroyed my homestead?

Some African Americans today think that a "black history month" is a bad idea. After all, black history is American history. Isn't it just. Courage and perseverance, surviving and succeeding. Here's to their stories.