One Simple Act to Save Lives

﻿﻿ ﻿ ﻿﻿﻿ ﻿ ﻿ I was recently watching the mini-series, “The Tudors”, and found out that both Henry VIII’s mother (Elizabeth of York) and his third wife, Jane Seymour, died of “childbed fever”, Jane, after giving birth to Henry’s only son, Edward VI. Both women came out of the delivery just fine, but died a short time later. How could a simple fever cause their deaths?

﻿﻿Because it wasn’t a simple fever. Childbed fever was a bacterial infection caused by one thing: doctors not washing their hands.

Doctors, who were usually gentlemen, thought their title and status was enough. “Doctors are gentlemen," Charles Meigs of Philadelphia’s Jefferson Medical College said, arguing against hand-washing, stating that “gentlemen's hands are clean.” But stats and facts obviously said different. In fact, there were far fewer deaths of mothers who had children born at home than those cared for by doctors in hospitals, proving that the doctors habits of not washing their hands between patients created periodic epidemics of childbed fever deaths.﻿﻿
﻿﻿ In the late 1700’s and early 1800’s more than one doctor put two and two together and tried to make changes in medical procedures. But to no avail—and often to their own professional downfall. Doctors held themselves above other professions and didn't want to hear that they were at fault, or culpable in anyone’s deaths—even though washing hands reduced childbed fever deaths by 90%. Pride goest before destruction, and a haughty spirit before a fall. . . unfortunately, new mothers’ destruction.

﻿﻿
There have been other famous women who died of this streptococcus-virus, the same bacteria that causes strep throat (among other ailments.) Eighteenth century feminist, Mary Wollenstonecraft, who wrote A Vindication of the Rights of Woman and who was the mother of the author of Frankenstein, Mary Shelley died of the fever, as did Isabella Beeton—who wrote the well-known Victorian home guide: Mrs Beeton's Book of Household Management.  Women's rights and household management... if only these logical-thinking women could have helped the medical profession before it killed them.
﻿﻿ ﻿﻿Katherine Parr, Henry VIII’s sixth and last wife, died of the fever after Henry was dead, and she had married her fourth husband, Thomas Seymour—who just happened to be the brother of Jane Seymour, the king’s third wife (who, as I said) also died of childbed fever. Interesting interweavings that show the pervasiveness of this type of death.
A famous person to be born of a mother who contracted the fever--and lived--was the French philosopher, Jean-Jacques Rousseau

Now, sanitary measures have all but eradicated childbed fever, or if contracted, it can be treated with antibiotics. Just another reason to be thankful we live in modern times with soap dispensers at every sink, anti-bacterial sprays and gels, and Wet Wipes.//Nancy
Posted by Nancy Moser at 7:00 AM No comments:

I'm reading a history of my home town as part of the research for next year's book, The Shadow of a Name. As I read, I've been creating a timeline of what happened when ... because I don't want to have my main character riding a horse-drawn trolley that didn't exist, or living in a part of the county that was populated only by wolves at the time. Just this evening, I've been adding the growth of the school system to my timeline, and I read something amazing: 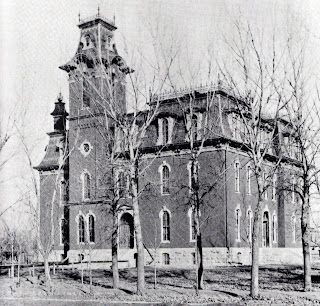 A notable feature of the high school is a series of lectures on subjects directly or indirectly connected with the course of study, given by persons prominent in educational circles, and occurring once or twice per week throughout the year. Among the lecturers have been the Governor of Nebraska, and other State officers, the Chancellor and other members of the faculty of the State University, lawyers, ministers and physicians of Lincoln, and the instructors of the high school.”

Does that course of study amaze anyone else? I remember my mother, who was born in 1913, saying that elocution was her favorite subject ... in 8th grade. I don't know any 8th graders who would even know what that is. I had to look it up. It's "the study and practice of oral delivery, including the control of both voice and gesture."

Well, now I have to look up orthography. This is getting embarrassing: the art of writing words with the proper letters, according to accepted usage; correct spelling. 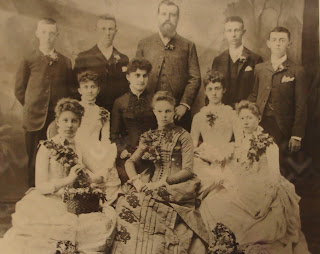 Lincoln's 1889 graduating class was about three times the size of the one pictured at the left. Still, I imagine our graduates dressed much the same. I love the flowers  and the general "feel" of the photo, which says to me that they were proud of what they'd accomplished and they were making the day memorable.

I wonder how many of those flowers ended up pressed and treasured for years to come. Did any of those young women go on to higher education? What opportunities lay before them? Whatever came their way, I wonder if they used their orthography, orthoepy, and elocution?

As to the high school portrayed above, that is the Lincoln, Nebraska high school, built in 1873. Historian James McKee says that "the trees, it was quickly pointed out, were not for shade or decoration. In the parents' haste to locate the school, they had chosen a site so far to the east of the city that a green belt was needed to protect the building from prairie fires ... Well into the next decade many parents would not allow their children to walk to school in winter for fear that they might be attacked by wild animals."

Honestly, the more I learn about "the good old days," the happier I am that all I do is write about them.

Posted by Stephanie Grace Whitson at 2:13 AM 9 comments: