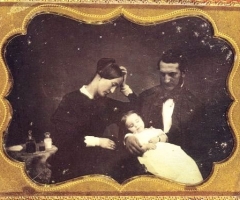 To cap off Halloween week, I'm going to share one of the most bizarre things I've ever encountered in my research:  family portraits that include a dead relative.  At first this didn't surprise me.  In their sorrow, the families surely wanted an image of the lost loved one--case in point this poignant photo of a grieving couple and their dead child from the mid-1800's.

But what disturbed me was finding out that often the photos were taken as if the dead were still alive.  They would paint eyes on the eyelids, and even add pink to their cheeks on the print.

But the most odd custom was propping the deceased up beside their living relatives.  There was even a special stand created for this purpose.

During the Victorian era this type of photography was very popular.  Actually, before photography, the wealthy often had portraits painted of their deceased relatives, often as they appeared alive, though there were sometimes a symbol of death in the portrait.
﻿﻿﻿﻿﻿﻿﻿ ﻿﻿﻿﻿﻿﻿﻿
﻿﻿ 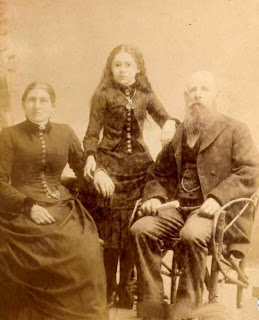 The girl in the photo at left is deceased.  Eyes have been painted on, there is an odd placement of the hands, and you can see the stand behind her feet.
Honestly, I understand that having images of their relatives might have given the families comfort, and I don't mind (as much) the photos of the deceased--looking deceased.  But propping them up . . . it seems to reveal a desperation.  But I can't judge them.  Grief confronts everyone differently, and who knows the sad stories behind their often untimely deaths.  Plus, since photos were expensive (though less expensive than having a portrait painted) rushing to get one last photo of a child, parent, or spouse is understandable.
There are many of these photos out there, but I'll let you explore the subject more at your own discretion.  Here is a very good website that also offers a good explanation about the evolution of photography.  Victorian Post Mortem Photos