Tudor England and Sandra Byrd, author of To Die For 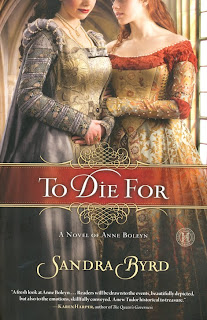 I've been away from the blog for a few weeks, scrambling to finish up a history course for my masters, begin a new course (they overlapped...YIKES) AND my next year's novel, attending a women's conference, and welcoming a new grand-child. This week I introduce you to my writing friend Sandra Byrd and her latest ..... while I work on a blog about KEYS .... and another about SHOES .... back soon! Steph

I have been drawn to Anne Boleyn since I was a girl, curled up in a beanbag chair, dog-earring books about her as I read and re-read them. My research journey took me to

Meg Wyatt, narrator of my novel, whom I came to love and admire. {I will quickly note that in my book I have switched the names of the Wyatt daughters so that the eldest is named Anne/Alice and the younger Margaret/Meg so that the story could be told without two "Annes" to confuse the reader.} My story idea was sparked by one solitary clue, an offhand comment in a Tudorplace.com.ar link that said that Anne Wyatt attended Anne Boleyn till her death, and that, at the end, Anne Boley

n had given her friend her prayer book, a very personal gift indeed, and just before her execution whispered something in her friend's ear.

I'm a lifelong lover of historical novels, especially all things English. On road trips, I was the nerdy girl in the backseat of the car reading Victoria Holt and Jean Plaidy streetlight by streetlight well into the night. I even named my daughter Elizabeth! Therefore, it's a dream come true to pen my own novels set in the Tudor court. Those reformation years were critical to refinement and revival in Christianity. Yet I found that while Anne's faith, and the faith of her friends, was well covered in nonfiction, fiction only infrequently highlighted her convicti

ons, often though not always portraying her as either vixen or victim. I wanted to add some new shading and nuance to the genre and telling it from Meg Wyatt's point of view allowed me to do that. Historian Eric Ives, Anne's principle biographer, says, "The absolute conviction which drove Anne was the importance of the Bible. For that reason, if her brand of reform needs to be given a label, that label must be 'evangelical.'" 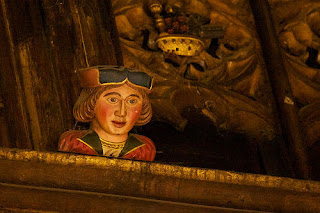 My research led me to London, which was fantastic, and many fascinating details. I loved, for example, the Eavesdroppers, little faces carved into the high eaves of the Great Hall at Hampton Court Palace.

They looked soft and sweet. But they were there to remind courtiers that someone was always listening, there was always a secondary audience to anything said at court, and that behind a pleasant face could be a heart of malice. I think it's interesting, too, that being a servant or highborn attendant was a position of honor. Your status wasn't determined by the job or tasks assigned to you, but by the rank of the person you served. That's good for us to remember, too, as Christians.

Learn more about Sandra's books here: http://www.sandrabyrd.com or purchase her new book about Anne Boleyn, told from the point of view of Meg Wyatt, here: To Die For