A Dime by Any Other Name... 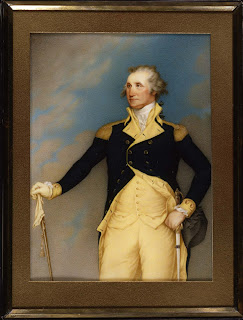 Recently, I went to a coin show with my husband and heard the most fascinating story that ties into my biographical novel Washington's Lady. It adds another layer to the respect I feel toward our first president and his wife, Martha.

When this country began as thirteen colonies, and even after we gained our independence from England, we continued to use British money. But since we were a free nation, it seemed logical that a new money system had to be created. American money. On April 2, 1792, the “Mint Act” was passed, giving the nation the go-ahead to mint its own coins. There were to be silver half dollars, quarter dollars, and half dismes—half dimes.

At that time George Washington was president and Thomas Jefferson was his secretary of state. As was usually the case with these patriots, they saw a problem and came up with a solution. For isn’t that the American way?

What follows could simply be legend, or it could be the truth. Knowing George and Martha Washington as I do, I choose truth, as the story fits with their character and continued sacrifice for their country.
Needing silver, George stepped forward and said that he would give Jefferson a letter to take to the Washington’s Virginia plantation, Mt. Vernon, authorizing Jefferson to take some silver that Washington had there to use for the coins. 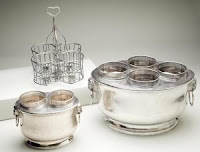 It’s fun to imagine Jefferson riding up to Mt. Vernon, knocking on the door, perhaps being greeted by Martha, home for a visit from the nation’s capital of Philadelphia. “Thomas. How nice to see you. What brings you to Mt. Vernon?” 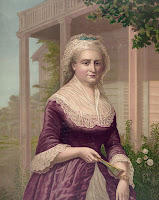 I’d love to have seen the look on Martha’s face when Jefferson handed her the letter from her husband, indicating she should hand over some of their personal silver. It’s said they gave between $75 and $100 worth of silver to the cause of new coinage. Considering most people earned $1 a day, $100 was a large amount. 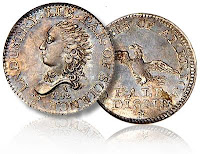 In 1792 fewer than 2000 “half-dismes” (pronounced “deems”) were cast, but it’s not known whether they were ever circulated or just given away as souveniers. There’s a notation in Jefferson’s diary for July 13, 1792: “rec’d from the mint 1500 half dimes of the new coinage.” But there’s also some evidence that Washington handed the half-dismes out to friends and dignitaries. So the mintage could have been more than 1500. Perhaps George was given some half-dismes for his own use, as a repayment toward the silver he provided. Whether circulated or not, the half-disme was the first step to the minting process that would follow in the newly formed U.S. Mint being built. The first widely-circulated American coins came out in 1796. 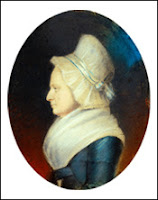 There’s also an unsubstantiated story that Martha’s profile was the inspiration for the woman’s head on the coin. I’m not sure what I feel about that story. Martha did not like being First Lady. She had the heart of a patriot, but she also had the heart of a woman, the heart of a wife. When George agreed to become the head of the Colonial army during the war—and ended up being away from home for eight years, she accepted their separation as a sacrifice for the good of the cause, albeit, not without a few complaints. But when the war was won and George was asked to be its first president, she rebelled and virtually said: Enough. Haven’t we given enough, George? When is it someone else’s turn?

But George was an ambitious man and had trouble saying no. He was president through two terms, and was the the only president to get 100% of the electoral votes. But Martha was a reluctant First Lady (though actually, the term hadn’t been invented yet.) She did not like being in the limelight and just wanted to be home with George in Mt. Vernon, “under our own vine and fig tree.” So for her to agree to have her likeness on a coin? I don’t think so.

Actually, Congress thought about putting George’s portrait on some coins, but he dismissed the idea as “monarchical”.  Only kings did that while they were alive. So the Mint Act specified a "portrait emblematic of liberty."  The woman on the half-dismes—whether Martha’s likeness or not—is representing Lady Liberty.

George Washington was in his second term of president in 1792, when he addressed Congress on November 6 about the new coins: “There has been a small beginning in the coinage of Half Dismes; the want of small coins in circulation calling the first attention to them.” It would seem by his statement that the half-disme was intended to be put in circulation. 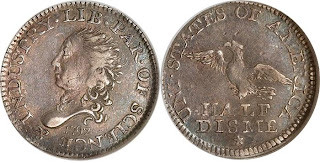 Around its circumference the coin has the words: INDUSTRY - LIB - PAR - OF – SCIENCE.  Translated, that means, "Industry and liberty on par with science". There is no mint mark, as there was only one minting place at the time: Philadelphia.

I saw one of the few remaining half-dismes at the coin show (it's said that fewer than 200 remain.) It was smaller than a modern dime, and weighed less. It could have been mine for $175,000. One half-dismes, in mint condition sold a few years ago for over $1 million. Yet to think that George and Martha and Thomas might have held that particular coin in their hands…or Benjamin, or John or Abigail… I get heady thinking of it./Nancy
Posted by Nancy Moser at 8:00 AM