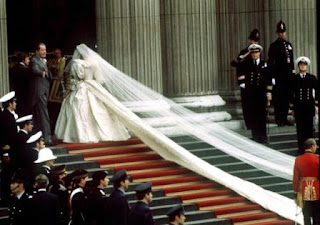 On this, the 30th anniversary of Charles' and Di's wedding, I'm going to write about St. Paul's cathedral. My family and I were in London last week, and while there, had a tour of St. Paul's.  I knew of St. Paul's because it was the site of Princess Diana's marriage to Prince Charles on July 29, 1981.  I will always remember the photo of her on the front steps, with the train of her dress cascading down the stairs.   I remember watching her fairy-tale wedding on TV.  Too bad the fairy-tale ended... 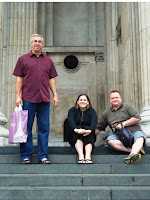 It was exciting for me to walk those same stairs, be in that same church.  Here's a picture of some of my family sitting on the steps just to the right of where Diana walked--where the London police are standing in the photo.

Yet even with St. Paul's being the place of Diana's wedding, the piece of history that touched me the most happened forty years earlier.

As we approached St. Paul's, our London guide stopped and had us admire the dome.  It turns out the dome was a beacon of hope for Londoners during World War II.

London endured "the Blitz", a period of eight months when Hitler bombed the city with the intent of demoralizing its citizenry.  It all started on September 7, 1940, at 4:00 PM.  Unable to invade England, Hitler sent 348 German bombers escorted by 617 fighters to bomb London for two hours.  Then, guided by the fires, another wave flew over and added more destruction.

For 57 consecutive days London was bombed.  The parents of our guide (children at the time) were sent to the country, to safety. 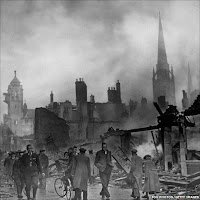 Some of the bombs were explosive, but others were phosphorus bombs that caused fires.  Hundreds of volunteers manned the roof of St. Paul's with the sole job of throwing sand or dirt on those phosphorus bombs when they landed, snuffing them out.  Water would have allowed the phosphorus to spread and burn more.  Each morning, as the citizens of London came out of their hiding places, they looked for the dome of St. Paul's.  If it was standing, they were standing.  England was still standing.  Churchill made saving St. Paul a priority for the morale of England. 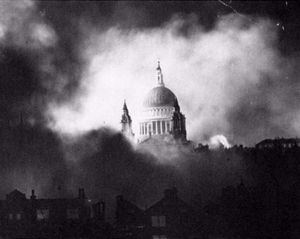 The worst day of bombing came on December 29, 1940.  Dozens of fires were put out and a bomb that lodged in the dome fell away, damaging the Stone Gallery, but leaving the dome intact.  Here's a famous photo taken by Herbert Mason, showing St. Paul's rising above the smoke.

I was inspired by the spirit of the Londoners who helped each other get through this awful time.  Over 20,000 died during the raids and 1.5 million homes were damaged or destroyed.  Because of their tenacity and the courage of the British armed services, Hitler's plan was curbed.  He stopped the bombing in May of 1941 and turned his attention to the Russian front.﻿﻿
﻿﻿
I was also moved by the American Memorial Chapel in the apse of the cathedral. It honors American servicemen and women who died in World War II. It was paid for by donations from British people.  There's a Roll of Honour that contains the names of more than 28,000 Americans who gave their lives in the defense of the United Kingdom in WWII.  Inside its glass case are a pair of gloves.  Each day a page is carefully turned so that every name is seen by the public.  It takes over 14 months to go through the book--and then they start over from page one.  I found this very touching, especially since my father served in the South Pacific in the Air Force for 2.5 years during the war... He's 91 now, and the sacrifice of that generation humbles me.

The Duke of Wellington is buried in St. Paul's, as is Admiral Nelson, and the architect of the church (and many London churches), Sir Christopher Wren. So it's a place of internment, of weddings, of memorials, and honor.  As a newspaper said a few days after the horrible December 29 bombing:  St. Paul's "symbolises the steadiness of London’s stand against the enemy: the firmness of Right against Wrong.”

Long may it stand.//Nancy
Posted by Nancy Moser at 8:00 AM