Trains, Boats . .. and NO Automobiles

It’s 1895. Look at a map. If you were rich and lived in New York City and wanted to go to Newport, Rhode Island for the six-week summer season, how did you travel those 175 miles? 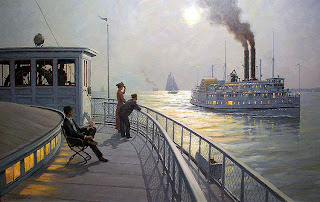 Cars hadn’t been invented yet. And considering Newport was on an island... You had two choices: take the train or take a steamer ship.
When I was doing the research for An Unlikely Suitor, this transportation issue was my biggest challenge. It’s not like there are that many train schedules sitting around from 1895. And as an additional complication, the character who needed to go on the journey was a poor seamstress, not someone from the Vanderbilt set.﻿


﻿
I discovered that most wealthy travelers took steamers. The Fall River line left from the North River in NYC in the evenings so its passengers slept on the ship and stopped in Newport, continuing to Fall River, Massachusetts, then continuing on to Boston, where businessmen could be at work in the morning.
﻿﻿﻿﻿
The interior of these steamers was luxurious. They had staterooms, or there were berths in dorm-type rooms. Even middle class passengers could experience a bit of luxury on such a ship.
﻿﻿


﻿﻿Others went on the train from Grand Central Station (see my June 2 blog) to Wickford Junction, Rhode Island, where they’d take a short trek down to the dock to catch a steamer for the 75 minute trip to Newport. On the trains, the second class cars were simple seats and had a shared lavatory for both men and women.﻿﻿


﻿First class train travel was more luxurious, with velvet seats, and gilded ceilings. There were salon cars and dining cars.
﻿
﻿
But… it still must have been a hot and noisy ride as men wore suits and women wore long-sleeved, high-necked ensembles. And hats and gloves. A few years ago I was riding in a train in France that lost its air conditioning, and it was a miserable experience—and I was dressed for the heat. So first class or no, travel could be tedious.
﻿
When the wealthy set arrived in Newport, they would find that their summer homes were ready for them, as their servants had been sent ahead weeks earlier. And each socialite had ordered at least thirty new outfits for the 6-8 week season. Summer vacation was a big production for all involved.

Sometimes I imagine being able to take one of these ladies in my car and explain to her the highway system, rest stops, drive through food, cruise control, reclining seats, climate settings, cup holders (and 44 oz. drinks), navigation systems, back-up cameras, the radio, CDs, and DVDs. They’d probably scream from the speed alone...

But wouldn’t it be fun to share?//Nancy