It's Monday, and I (Stephanie) can't think of a better way to begin a week than with a great story combined with a good deal. 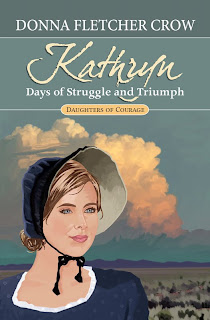 Donna Fletcher Crow (www.DonnaFletcherCrow) joins us today to share footnotes from Idaho histor
y (inspired by her own family heritage), with news of a re-release of her beloved Daughters of Courage series.
The "good deal" part is for those of you with ereaders, because Greenbrier has made the books available for a short time for ... can you believe it ... less than one dollar each. Happy Monday, booklovers! (Kindle: http://ning.it/kqmEE1 Nook: http://ning.it/lruv7t).
I suppose I should admit right away that two of my favorite reasons for loving Kathryn's story include the Scotsman (I'm part Scot) and the character named Stephanie (ahem). Lenore Persons of Guideposts Books said this after reading Kathryn: It’s rare to find novels that combine a strong Christian ethic with such compelling story-telling. Because these are real people and real events, the experiences of faith challenged and faith triumphant are all the more meaningful. I hope that Donna Fletcher Crow’s loving testament to her grandmother and mother and to the brave men and women who shaped our country will touch you as much as it did me.
The story's main character,Kathryn, has never been short on courage. But then she's never faced a wilderness so hot and dry that the only growing thing is endless miles of rattlesnake-infested sagebrush with the nearest fresh water 15 miles away. Yet Kathryn Jayne is determined not merely to survive. She will thrive. Even when those nearest to her die. Even when murder strikes their tiny community. Even when a dashing, irreverent Scotsman struggling to outdistance a troubled past brings turmoil to Kathryn’s heart.

From untamed Idaho, to Edwardian London, to enchanting Scotland, Kathryn records her experiences in the journals that become an inspiration for her family and the basis for this gripping saga.Through every generation America’s women have exhibited courage, spirit and faith. Kathryn, Elizabeth and Stephanie are true Daughters of Courage. This sweeping family saga will help today’s women find inspiration to triumph in the challenges we all face. 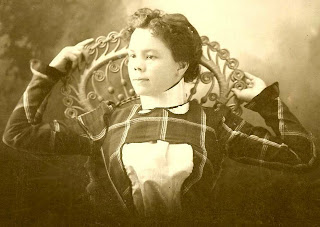 Let's talk about the history behind this series. You mentioned a family photograph?

Even as a child I loved this picture of my paternal grandmother Esther Fletcher when she was a teenager. She was so pretty. And I loved her dress. Could my grandmother ever have been that young?

I have always been able to look at a picture from history and put myself in that scene, so when my editor askedme to write a pioneer series, I knew I wanted to tell my grandmother’s story.

What was the most surprising thing you learned about "the real story" while researching this book?

Well, okay. I didn’t immediately want to tell my grandmother’s story. I didn’t want to do a pioneer story at all. Jeanette Oke was all the rage at that time. And there was the wonderful Little House on the Prairie series. One more tree didn’t need to die for another pioneer story.

Then I began researching the lives of my grandmothers and other Idaho pioneer women— and I discovered that our desert pioneers had completely different stories from the sod buster stories we all think of when we say pioneer romance.

These incredible women who homesteaded in the desert before the irrigation canals were dug in 1909 had to survive a climate so dry that washing wrung out by hand and spread on a sagebrush bush at night would be dry in 20 minutes. After Indian Creek dried up in June the nearest water was 15 miles away in the Snake River and had to be carted up in a horse-drawn buckboard. And the only creatures who could survive in the wild were jackrabbits and flying ants that would swarm down the stovepipe in the heat of the day. Then fall dead on the floor when soot encrusted their bodies.

And yet these brave women not only survived their days, but would also sit down at night and write in their journals. These journals have been collected in the Kuna Library where I did a great deal of my research and I used Kathryn’s journal as a through-line in my series as a source of strength for her daughter and granddaughter. 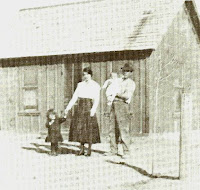 Besides the photograph of my grandmother which I mentioned above, the photographs, such as this one on the left, of pioneer families standing proudly in front of their homesteads inspired me with a sense of the courage and vision they must have had. Surely they were seeing “the desert blossom as a rose” in their minds. Look hard and you’ll see a heartbreakingly fragile tree planted beside the house.

One book that really helped my research was titled THE SETTLEMENT OF THE KUNA REGION 1900-1925 (sponsored by: Kuna Joint School District No. 3, Kuna Library District, and the Association for the Humanities in Idaho, and dedicated to the memory of Warren Reynolds who was a moving force in the Kuna History Project). Warren Reynolds must have been a distant cousin of mine, because Reynolds is a family name on my mother’s side. The book was helpful for its narrative, but even more so for its many, many pictures like this one.

What spiritual encouragement did you draw from what you've learned?

Every generation has its own unique challenges that require its sons and daughters to stand strong, but God is always faithful. I find it encouraging to know that no matter how hard things might seem today, and no matter how dim the flame of faith might flicker, it has been much harder and the flame has burned much lower in other times, but it has always come back. At times only a handful have stood against a dark, but, with God’s help, it has been enough.

Did you meet a special woman from the past you'd like to tell about?

Kathryn is a composite of both of my grandmothers Esther Smith Fletcher and Tennie Botner Book. Although I have very dear childhood memories of both of these courageous women (they were both at our wedding, even) I felt that I came to know them in a new way by recreating the world they raised their families in. A world so different from our own that required skills and knowledge none of us have today.

Special thanks to Donna for joining us today... learn more about her and her stories at:

www.DonnaFletcherCrow.com (AND DO GO HERE...I think Donna has the most intriguing author photo I've ever seen. Makes me want to tag along on her next research trip!)