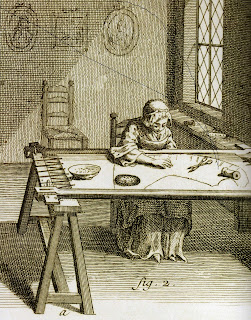 In a recent post, Nancy told us that American dressmakers often looked to France for inspiration, but as the 19th century wore on, they became increasingly independent in their design ideas. I recently attended a lecture that made me aware of just how far-reaching the French fashion industry has been over the centuries.
Godey's Ladies books might have brought
French fashion to America in the 19th
century, but the French were "all about fashion" long before that!
The lecture I attended was sponsored by the International Quilt Study Center and Museum in Lincoln, Nebraska, in conjunction with their current exhibition titled Marseille: White Corded Quilting, which features phenomenal works from the collection of Kathryn Berenson and others. See more of the exhibition at
http://www.quiltstudy.org/exhibitions/online_exhibitions/marseilles.htm.

Because of my love of all things French ... and my passionate interest in quilting traditions ... Berenson's books pictured here are two favorite reads.
When I look at the engraving above of the woman bent over the quilting frame in an atelier in France, I can't help but wonder what her life was like. She spent hours a day creating phenomenal quilted clothing. What would she think if she could see us today as we stand in open-mouthed wonder at her exquisite handiwork?
Among the more jaw-dropping things I learned from speaker Frederique Sevet-Collier at the lecture that day was that, by 1680, the women working in 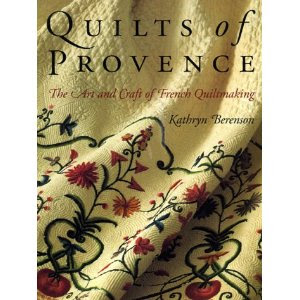 the textile ateliers of Marseille, France, were producing 40-50,000 pieces of whitework a year. Tens of thousands.
What's corded whitework? Draw a design on a piece of white cloth, then layer that with a backing fabric and stitch along the design. Finally, separate the weave on the back layer to introduce a length of white cording into the channel created by the stitching. How many hours do you suppose it took to create even a small piece? Surely hundreds of hours. Other more intricate pieces in this exhibition would have required thousands of hours.
While the Marseilles whitework industry was nearly eliminated by the Plague, quilted clothing remained in vogue for centuries. I am still amazed by the work that went in to making beautiful petticoats like this one in my personal collection. Petticoat ... as in ... undergarment rarely seen by anyone but the wearer. Amazing ... and somewhat simplistic compared to the pieces on display at the museum. Still, as I run my hand over the feathers quilted into the hem, I imagine "her" ... and I'm inspired to attempt to tell her story. 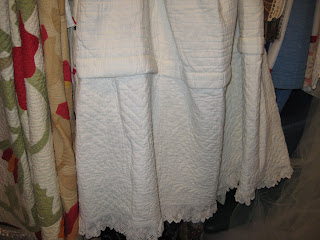 Of course "she" lives on the Great Plains in the 19th century, not at Louis XIV's court. She's a newcomer to fashion compared to the ladies who wore the creations from Marseilles. Still....I wonder....what if one of those women's creations traveled to the New World in a trunk aboard a ship .... what if .... 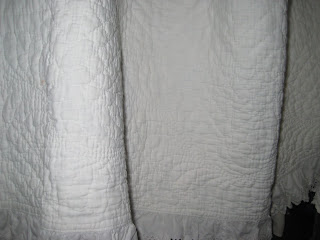