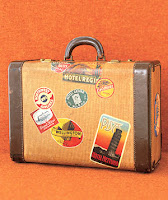 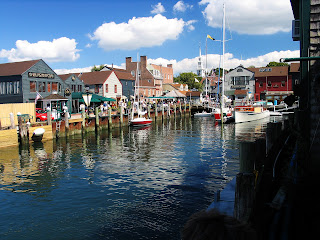 But during the Gilded Age (the last few decades of the 19th century) where did people go to escape the cities of New York and Boston? One of the most popular destinations was Newport, Rhode Island. Actually, I have roots in Newport--old roots.  An ancestor of my family landed in what would become Newport. The town was founded by Englishmen in 1639 and my very great-grandfather stepped foot there in 1643. Of course, native Americans had been in the area for 5000 years. At first, Newport was a haven for those seeking religious freedom, but it soon became a bustling center of trade. 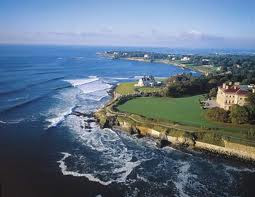 My husband and I discovered Newport in 2007 and were immediately charmed by the waterfront of tall ships and sailboats, and the amazing Cliff Walk. Edging the east side of the island, the rugged Cliff Walk is a narrow public path dividing the waves crashing on the rocks close by and the stunning mansions of the mega rich.

During the last half of the 19th century, Newport became a vacation spot for the middle class and for the wealthy industrialists of New York and Boston. The mingling of the two classes added interest to a city used to independent spirits. 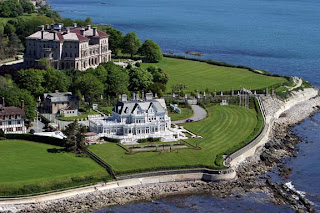 After the Civil War, beautiful summer homes were built on and around Bellevue Avenue. Owners were senators, bankers, railroad barons, and entrepreneurs. This was a time before income tax, leaving plenty of income to build lavish (and more lavish) mansions. These homes were often inspired by European castles and palaces,  yet they were called “cottages”.  Very funny. Millions of dollars were spent on the homes—homes that were only used for 6-8 weeks each summer. 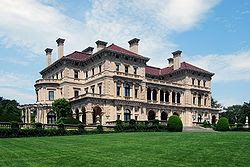 My husband and I took tours of many of these mansions (the Breakers, Marble House, the Elms…) and were blown away by the gold and the gilt, the marble, statuary, carvings, and furnishings. But mostly, we were impressed by the massive size. The Breakers (I’ll go into more detail in a future blog) encompasses 65,000 square feet. It was built for Cornelius Vanderbilt II and his wife Alice. This was a single family home? Its construction was a successful attempt to one-up its neighbor. Next door, Cornelius' brother and sister-in-law (William K. and Alva Vanderbilt) lived in the regal Marble House that boasted 500,000 cubic feet of marble. Talk about keeping up with the Joneses...

The vastness, the decadence, and the image of a summer vacation far different from anything I’d ever experienced, spurred me to write a novel set in Newport. An Unlikely Suitor comes out May 1 (you can preorder it now). It’s the story of an immigrant seamstress from NYC who befriends a rich socialite. The two girls end up in Newport during the height of the summer season in 1895. What a culture shock for Lucy Scarpelli to go from the immigrant slums of Five Points to the opulence of these mansions.  Those of you who've read Masquerade will recognize Lucy as Lucia Scarpelli in that book.  Her mother and younger sister, Sofia, are also vital to An Unlikely Suitor. But it's nine years later and Sofia isn't a little girl any more...

In the coming weeks I’ll share some of the interesting historical tidbits I discovered as I wrote this novel. I hope you’ll enjoy this journey through Lucy’s Cinderella season in Newport.//Nancy Moser
Posted by Nancy Moser at 4:35 PM