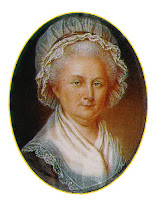 While we are speaking of great loves, I offer you another: Martha and George Washington. They were an unlikely pair. Physically they were almost laughable: he, 6’4” and she around 5’. He, tall and lanky and she, plump. That’s our image of her; a pudgy woman wearing a funny hat, walking in George’s shadow.
How untrue! Yes, she grew pudgy, and the odd cap was the fashion--and worn to make her look taller, but George called her “my other self.” I’d melt if my husband called me that!
﻿

﻿ When George and Martha met, she was a pretty twenty-six-year-old widow—the richest widow in Virginia. She’d married Daniel Custis when she was nineteen and together they ran the White House plantation in New Kent County, Virginia; near Richmond and Williamsburg (the name of the plantation is a bit ironic, don’t you think? And it was massive: 17,000 acres.
They had four children, but two died. And then Daniel died, leaving Martha with four-year-old Jacky and 18-month old, Patsy. She was sought after by many suitors but she vowed if she married again she would marry for love. For though she had loved the 38-year-old Daniel Custis in a fashion, it had been a marriage of respect rather than passion. She also vowed to marry a man nearer her own age. She didn’t want to be widowed twice.

One weekend when she and the children were staying over at a neighbor’s estate, a dashing young hero of the French and Indian war happened by. George Washington stayed for dinner. He and Martha hit it off and stayed up all night talking. In hindsight the bond has God’s hand all over it.
﻿
﻿ Soon after, they became betrothed, then married at White House in 1759. Martha heard the rumors that George was marrying her for her money—and knew it was partially true. George had a small plantation (1700 acres) up north. He had big dreams for Mt. Vernon. Martha was excited about the prospect of working together as a couple to achieve those dreams.

The one regret Martha had about their marriage was that she didn’t let George fully be a father to her children. She over-indulged them and Jacky grew to be wild and nearly unmanageable. And sadly, she and George never had any children of their own. I often wonder why God didn’t allow this great man—this great couple—to have heirs.

George and Martha had ten “golden years” at Mt. Vernon, but the unrest between the Colonies and their mother country, England, heightened to the point that a stand had to be made. It was war. And George, with his military experience and his reputation as an honorable man who was liked by people of all locales and walks of life, was the perfect choice to lead the army.

When the fighting started in New England, George left Martha at Mt. Vernon, to do his duty. The war did not go well. The colonists were out maneuvered, out financed, out trained… yet they felt in their hearts that theirs was a worthy cause. And they felt God was on their side. 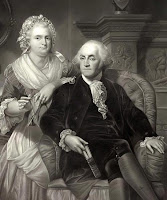 In the winter, when both sides hunkered down to wait for spring, George had to stay up north. If he left, the American troops were more than willing to go home to their shops and farms. For eight years he remained away from Mt. Vernon.

So what did Martha do? Every winter she traveled up north and joined George in the camps: Morristown, Valley Forge . . . the conditions were horrible, the supplies scarce. She brought as many supplies as she could from Mt. Vernon. And she sat by the soldiers, held their hands, listened to their stories of home and family, and prayed with them. They came to anticipate the visits of Lady Washington.

But even more than this, Martha was there for George. She was his sounding board, his comforter, his other self. They were a pair ideally suited to each other and the situation at hand.

When the war was finally over a new government had to be formed—from scratch. For this new United States of America didn’t want to do things the old way with kings and queens. They wanted to create a new and better way of government. They decided there would be a president elected by the people. And again, who better to bridge the disparity of this wide-spread country of independent-minded people than the man who had led them to victory.

Martha did not want George to be president. Hadn’t he—hadn’t they—sacrificed enough? Duty was all well and good, but didn’t there come a time when a couple could let others lead?

Martha disliked the eight years of George’s presidency. There was much upheaval because everything was new, everything had to be created from nothing. When it was finally time to go back to Mt. Vernon, they both relished the time alone under their own “vine and fig tree.” And yet they were not alone. During the first year they had over 600 overnight guests. I can imagine Martha shaking her head as another stranger knocked on their door. “Set another plate for dinner…”

If you’d like to read more of Martha’s story, read my biographical novel, Washington’s Lady. //Nancy