A Glove on the Hand

I remember the first time I saw the movie, “Age of Innocence”, two scenes stood out. The first one was at the ball, when the men brought multiple pairs of their gloves which they would change out whenever they changed dance partners. Talk about obsessive. And not a smidge of H1N1 in sight. 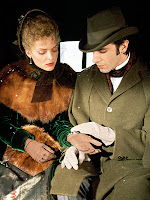 The other scene is quite famous (or is it infamous?) It’s the scene when Michelle Pfeiffer’s and Daniel Day-Lewis’ characters are in a carriage. The sexual tension between the two fuels the entire story, and in the carriage, Daniel (as Newland Archer) goes crazy and unbuttons Michelle’s (Ellen's) glove in order to kiss the only inch of skin not covered in her Gilded Age garb. It was one of the most sensuous scenes I’ve ever seen. My husband (who by this time was wondering why he'd ever agreed to go to the movie with me) thought it was ridiculous. I won’t go any further with a discussion of what men and women consider romantic, but I will say that movie got me interested in the history of gloves. 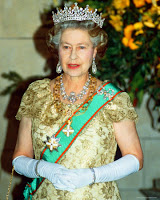 Nowadays, if we aren’t debutantes or royalty, we only wear gloves when it’s freezing outside, so I don’t have much personal experience, although I do remember wearing white gloves with my Easter outfits in the 1960’s, and feeling quite spiffy.

Obviously, gloves have been around for centuries, but they really became a part of fashion in the 1700’s, when over-the-elbow gloves came in vogue. When Napoleon’s Josephine (who wore them because she didn’t like her hands) wore them long enough to reach the puff in her short sleeves, long gloves swept the empire. Here’s another empress, the Austrian Empress Sissi in her gloves circa 1854. 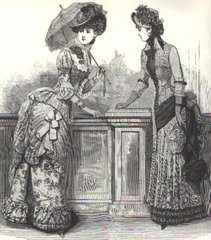 By the end of the 1800's, women’s everyday clothes tended to cover most of the arm, so wrist length gloves became popular—except for evening, of course, when dresses showed off the arms. To ease getting into the long gloves, a slit was added, and the opening was closed with three or four buttons. Snaps became vogue in the late 1890’s. But putting those long gloves on was a chore and often required a buttonhook, and as such it was not proper to put them on in public. You put them on and kept them on until you went home. Actresses Sarah Bernhardt and Lillian Russell added to the craze.

﻿﻿﻿ ﻿﻿ Have you ever tried to do anything with gloves on? It’s difficult. But women found a way around the problem by slipping their hands out of the finger-part, and popped them out the opening.

﻿ ﻿
Although gloves at the beginning of the 19th century came in a multitude of colors, during Victorian times white and ivory were it—black being too flashy. Gloves were so much a part of a woman’s identity that many women asked to be buried in their gloves. 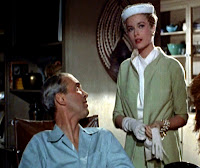 During my growing up years I remember Grace Kelly wearing gloves in "Rear Window", Audrey Hepburn in "Breakfast at Tiffany’s", and of course the fashion icon, Jackie Kennedy. Women wore gloves to church, out shopping, and certainly to bridge club. My mother was one of these women. I always associate gloves with elegance and class.
Considering the world could use a healthy dose of both, perhaps I should start a trend.
Posted by Nancy Moser at 8:00 AM 6 comments: