Remember featherbeds and pallets on the floor? Remember sleeping in you grandparents unheated upstairs and making a run for it in the morning to dress by the stove in your grandmother's kitchen? Remember being snowed in and loving it?
Much of the nostalgia I feel about having snow this time of year is probably a result of the modern era inventions that have made it so much easier to deal with the effects. Here's a heroic (at least I see him as a hero) storm story related by one Nebraska pioneer who was writing to his wife back home about his experiences in the west:

... now I can tell you of one of the most terrible storms I ever witnessed. It struck us at sunset Sunday evening with wind & rain ... Monday morning it turned to snow ... the storm lasted from sunset Sunday evening till near midnight Wednesday night making near 80 hours storm. When we would go out to try to do anything for the stock we could not see other more than from 5 to 10 ft & to be heard we had to shout at the top of the voice on account of the wind blowing such a gale ... there was a woman about a mile from here with 4 children whose husband was away from home and I knew she had but little wood if any so Wednesday afternoon I concluded to make the effort to reach her and see how they were getting along & I had to go right against the storm ... I would proceed abut 5 rd [rods] then turn and get a little breath then try it again in this way I succeeded in reaching the house & she was mighty glad to see me as they were out of wood and the ax buried under the snow. They had been in bed for 2 days only as she would break up something in the house to burn & cook something for the children to eat the oldest was only 7 years old. I dug the ax from under the snow hunted my way to a pig pen got a couple of poles and cut wood enough to do till next day then started home again ...

I'm thankful I don't have to worry about getting to the well and hauling in water, or breaking frozen water before I can wash up or make coffee in the morning. I often have the luxury of avoiding even going out when the weather is at its worst. Oh, I do my share of whining about shoveling and snowblowing when Nebraska winters rage, but overall, I have it fairly easy compared to my pioneer foremothers.

Have a safe and blessed Christmas, friends ... and a white one, too, if that's your heart's desire. 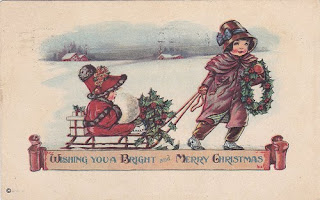