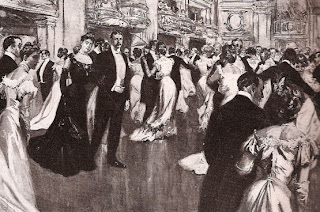 During the last few decades of the 19th century, “The Four Hundred” became synonymous with the cream of New York City society. It was a list of the 400 society elite. And yet, in an odd turn of events, the phrase was coined before the list actually existed… 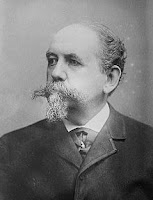 Remember Ward McAllister, the event-planner, go-to guy for what-was-what and who-was-who I wrote about last week (see"Mr. Society" blog)? It’s said “the Four Hundred” term came about when he was asked by a reporter how many people would be at the next Patriarch’s Ball. McAllister said, “I supposed about as many as the ballroom at Delmonico’s will hold.” The reporter asked for more details. McAllister looked to his wife, who said, “About 400”. The newspapers ran with the idea that there were only 400 in New York City society and coined the phrase “the Four Hundred.” But there was no list.  ﻿﻿﻿﻿
﻿

﻿﻿﻿﻿McAllister—always eager to be in the public eye—ran with the idea and started talking about “the Four Hundred” as if it was a real entity. Sometimes he’d say that was the number of people who would fit into Mrs. Astor’s ballroom, and added that 400 was the number of people comfortable there. Not physically. Socially, as in, “If you go outside that number, you strike those who are either not at ease in a ballroom or else make other people not at ease.”﻿
﻿
﻿


﻿﻿﻿﻿﻿These kind of statements got everyone talking about who was in and who was out. The pressure to reveal the list was so strong, that in 1892, three years later, McAllister chose the date of Mrs. Astor’s annual ball to reveal the list—which only held 319 names, from only 169 families. The list contained a lot of inaccuracies. Names were misspelled, spouses were missing—or included even though they were dead (more on Caroline Astor next week.) And McAllister wasn’t consistent with his own requirement of “birth, background, and breeding.” Most of the old guard, the “Knickerbocker” families who had run New York from the seventeenth century, were on the list, but not all. There were some newly-rich, and some who just seemed to be there because they were McAllister’s favorites. Even families were divided: some family members on the list, and some not. The only common link was money. Old, new, inherited or earned, everyone on the list passed the test of being wealthy—and so were the prime candidates for the prime parties. The Four Hundred received the attention that we now give to music and movie stars. The press and the public loved hearing about their extravagances—and their troubles.
And yet, amid all their pretension, the members of The Four Hundred were often unsophisticated, obsessed with pretension and rules, not known for their brilliant table-talk, and could be quite prudish. One woman had a party in her new home and was proud of all the classical statues that graced its foyer. But the Four Hundred were appalled at their . . . nakedness. So next time, she covered the offensive parts with handkerchiefs. :o)

The Four Hundred sustained itself into the next century. Quite a feat for something that came about by accident. An excellent book on the subject can be found here:The First Four Hundred by Jerry Pattterson. In the back of the book, Patterson lists the first Four Hundred, and gives some interesting biographical information about most.//Nancy Moser