How many kids can you fit in a shopping cart and still shop? From personal experience, the answer is two: one in the baby seat, one in the main compartment—as long as he sits still and is willing to hold cans of soup, boxes of cereal, and various fruits and vegetables. With three kids this was our usual routine—with the eldest, Emily, helping me choose items from the shelves. Now that I have three grandkids, and take care of one of them every Monday, I have come to fully appreciate shopping carts. As soon as little Lily was old enough to sit in a cart I was free to use a portion of my Mondays for errands. At age three she's become quite the shopper.
There's no way I could take Lily with me to shop if it weren't for carts. Yet believe it or not, they are a rather new phenomenon. Sylvan Goldman, of the Humpty-Dumpty grocery chain, invented them in 1937. One evening he was trying to think of ways to get more business and happened to spot a folding chair. What if he raised it up, put a basket on it, added another basket beneath it, wheels, and a handle? With the help of Fred Young, a maintenance man at the store, he invented the first "folding shopping cart". But it was an unwieldy thing because the baskets had to be removed at the check-out and to store the cart, and the carts tended to fold when they shouldn't.  Remember, most stores weren't designed for storing a bunch of carts, or maneuvering around with them.

What is shocking is that people didn't take to the carts right away. He advertised his new invention in the paper, making a big deal about how it would change the shopping experience. This, from Goldman: "I got down to the store about 10 o’clock in the morning waiting for the time when people’ll start coming in, and this right on a . . . Saturday when it’s your biggest day, and I knew that I’d be seeing people lined up at the door to get in to get the merchandise and see what the dickens it was. And when I got there, I went into our largest store, there wasn’t a soul using a basket carrier, and we had an attractive girl by the entrance that had a basket carrier and two baskets in it, one on the top and one on the bottom, and asked them to please take this cart to do your shopping with. And the housewives, most of them decided, “No more carts for me. I have been pushing enough baby carriages. I don’t want to push anymore.” And the men would say, “You mean with my big strong arms I can’t carry a darn little basket like that?” And he wouldn’t touch it. It was a complete flop." 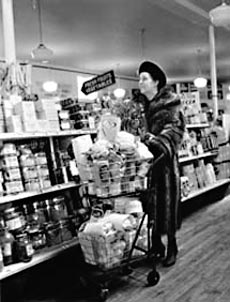 To sell the idea to his customers, he hired handsome models of all ages and both sexes to pretend to shop around his store (in fur coats, no less.  This woman must have a passel of kids to feed at home.) Once these shills (he admits that's what they were) were traversing the store, the pretty girl near the front handing out carts could say. "See? Others are using a cart, why not you?" It worked.  For more about Goldman go to: Sylvan Goldman & the Shopping Cart 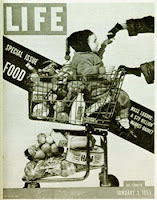 Shopping carts became such a phenomenon, that the "Saturday Evening Post" featured one on its cover in 1940.

In 1946, Orla Watson from Kansas City invented the telescoping shopping cart that could fit together for easier storage. He tried to patent it, but Goldman objected. They came to an agreement that Watson could have the patent if Goldman could have the license on a few other things. I'm no lawyer, but it sounds like they worked together, which after all is a good thing for two businessmen to do.  Because of this one invention the entire layout of stores and check-out lanes had to be redesigned. 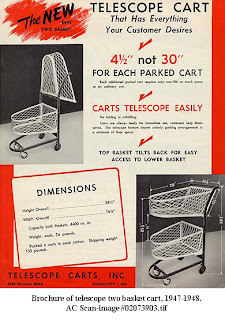 In 1947 they added a child's seat, and in 1952 someone invented the plastic flap in the seat that flips up so small items didn't end up on the floor. In 1954 someone decided to add color-coordinated, personalization to the cart handles. And in 1961 wheeled casters made the carts easier to handle. For a time there were even "power lift" carts that made the baskets rise to the level of the counter. It amazes me how people are so creative, constantly thinking of improvements. But it still comes down to the fact that someone has to start the ball rolling. Someone has to have the initial vision.

There have been studies done proving that stores that have carts (like Wal-mart and Home Depot) sell more than stores that do not (Penney's and Sears.) Our propensity is to fill up the space we have. Hey, we do it with our houses, why not shopping carts?//Nancy Moser
Posted by Nancy Moser at 8:00 AM