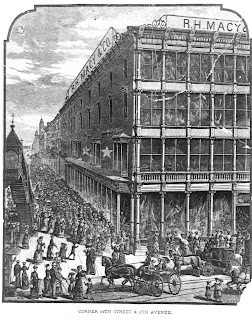 When we shop we often go to a mall, where all the stores are consolidated in one place. But just like the idea of the department store (see last week's blog), the idea of creating an area especially for shopping is over 160 years old. In the late 1850's in New York City, the Ladies Mile was born. The demand for "department stores" was growing so quickly, the retailers responded by moving close together uptown. The area on Broadway and 6th Avenue between 9th and 23rd Streets, came to be called the "Ladies Mile" (it's now encompassed in the "Flatiron District".) 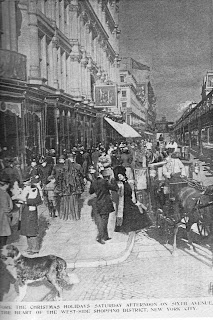 Remember the saying, Build it and they will come. Oh yeah. They came. In droves. An article in the New York World newspaper said that if you wrote out a listing of all the items sold at Macy's it "would reach Central Park." The article further described Macy's, saying it had "spread itself out along Fourteenth Street and Sixth Avenue until one is at a loss to tell where it begins or where it ends. It is a bazaar, a museum, a hotel, and a great fancy store all combined." 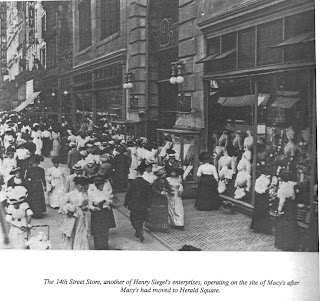 Adding to the allure were large windows showing off the merchandise. Again, we take this for granted, but "window shopping" was something new in the nineteenth century. It started with Bloomingdale's. The usual practice was to clutter up a display window with a bunch of goods available inside. But Bloomingdale's—and soon all the other stores—started decorating the windows with fewer items and more props, creating scenes and an ambiance. A lure to come inside. 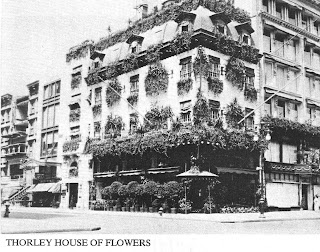 Henry Collins Brown, curator of the Museum of the City of New York in 1892, said the Ladies Mile had a "champagne sparkle." Further, "All the world came to Broadway to shop, to dine, to flirt, to find amusement, and to meet acquaintances." Department stores lined the street, but there were also exclusive specialty stores like Brooks Brothers, Tiffany's, and Thorley's House of Flowers. Thorley's was the first florist to use the long white box full of long-stemmed flowers packed in tissue. The exterior of their building was also an attraction, as it was decorated top to bottom with plants and flowers.

Many of these buildings remain--repurposed as the stores moved north. You can see photos here: Ladies Mile Historic District//Nancy Moser