Shop 'til you drop. In regard to women and shopping, my husband teases me, saying that women stand outside stores waiting for them to open, yelling, "I've got money! Let me in!"
Actually, the day after Thanksgiving that's not far off. Last year I went out at 5 a.m. for a special deal. When I came out of the store I was taken aback to realize the sun was just coming up.
Is this love of shopping a new phenomenon? Nope. Enclosed malls may be a fairly recent invention, but the department store? It's been around New York City since 1858. Pre-Civil War. Macy's was one of the first, but other stores eventually popped up: Lord & Taylor, Bergdorf Goodman, Bloomingdale's, and A.T. Stewart's. 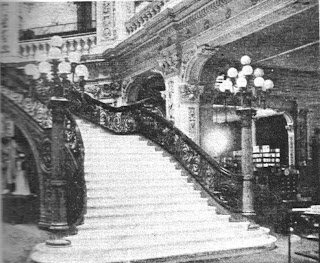 Stewarts isn't around anymore, but it was the inspiration for the department store owned by the Tremaines in my novel Masquerade. Their original downtown store at 280 Broadway can still be seen and is known as the "Sun Building" because the New York Sun newspaper had its offices there for decades. Stewart's was heralded for its grand staircase and skylit atrium. You didn't just go to the department stores to shop, but to have an experience. 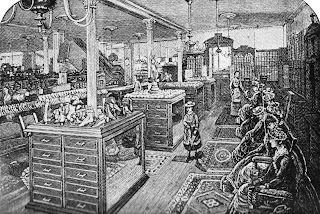 Many of the stores got such a following that they began to manufacture their own brand of goods. Macy's had "Red star" silk and velveteen, and were the exclusive distributor of Foster kid gloves in New York. They also made their own line of underclothing, linen articles, and men's shirts. 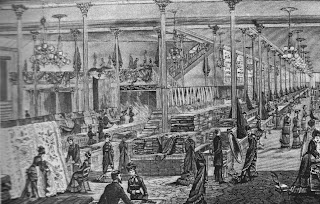 Stores began to advertise—which was heretofore unheard of. And as competition grew, they earned their customers' business by offering additional services. "Granted that the merchandise was of acceptable quality, people tended to patronize the stores which gave them the most attractive surrounds, the most convenient delivery, and the most satisfactory all-around treatment." In 1888 Macy's announced it would deliver goods in a 100-mile radius for free ($5 minimum order.) It worked well. In 1896-97 Macy's delivered 2.5 million packages a year! Seventy-five percent were delivered by Macy's own people (at a cost to them of 7.85 cents per package) with the rest subbed out for delivery (which cost 8.75 cents/package.)
Unlike many of its competitors, Macy's didn't allow customers to buy on credit. "Cash only" kept their prices down. A perk we take for granted was considered revolutionary at this time: the ability to return goods. Customer satisfaction came to the forefront, allowing customers to return defective merchandise. But it wasn't as carte blanche as it is today. There had to be a reason. But Macy's always gave you more than you asked for.  They erred on the side of the customer. 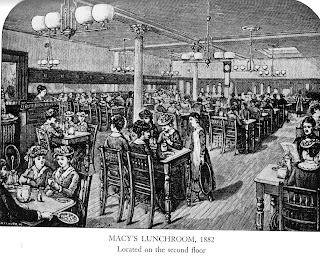 Some stores offered luxurious "rest" rooms for those who'd traveled from a distance. In 1892 Macy's advertised a sumptuous ladies "waiting room" that included $11,200 in artwork (about $250,000 in today's money.) Lunchrooms made it possible to stay on the premises to refuel. Elevators made it easy for customers to have access to additional floors. Electric lights and even electric fans made shopping more pleasurable: "Electric fans supply artificial breezes. They're as pleasant and inspiring as the winds that blow from wooded hill tops."  Department stores opened up another job opportunity to young women, many who left home to work there. One young woman, Margaret Getchell La Forge, started as a cashier at Macy's but was promoted to bookkeeper and then superintendent—one of the first women executives.

Macy's was determined to undercut the prices of all others. They had employees who scoured their competitors' stores to make sure Macy's prices were lowest. Once, in 1902, Macy's had some Japanese silks that sold for .41/yard. Hearn & Son started a price war. It ended the next day with Macy's selling the product for 11 yards for .01! This kind of price slashing was rare, but Macy's was also known for advertising comparative prices for like items. What one did, the others were often forced to do to keep up.

Dresses were often customized and made in-house. In Masquerade I have a "Pretty Woman" type scene, with the main character trying on clothing in a department store, with her man sitting close by, giving his approval—and paying the tab. In the 1886 Bloomingdale's catalog, clothing was offered in a multiple of color and fabric options. And if you wanted the trim changed, you simply had to include a fabric swatch so they could match the color. If you ordered a hat, you were to state your complexion color so a hat could be made that was flattering. This illustration shows a dress from the Bloomingdale's catalog. The caption says: "No. 41. Very handsome suit of plain material, trimmed with yak-lace; skirt with 3 rows of lace flouncing; short front drapery looped at side with ribbon bows; puffed back drapery; plain jersey waist; camel's hair or homespun. $21.75 and 24.50. No 42. Same of Cashmere or Nun's Veiling, trimmed with Egyptian or oriental lace….. $16.50, 18.75 and 20.50."
Catalogs were created for rural customers to pour over. Hence the term "wish books". If you ever find an original one, hang onto it, as they were so heavily used it's hard to find one intact.

Then, as now, shopping in department stores was often a women's event. Men were slower to change their ways and buy their clothing at such a place. That's why many stores put the men's departments on the first floor, to lure men inside for a quick job of it.  My husband would approve.
What did small specialty shops think of the department stores? What do small stores today think of Wal-mart and Target? They were not—and are not—amused. But progress will not be denied.  I have money!  Let me in! /Nancy Moser
Posted by Nancy Moser at 9:00 AM