Where the Immigrants Lived 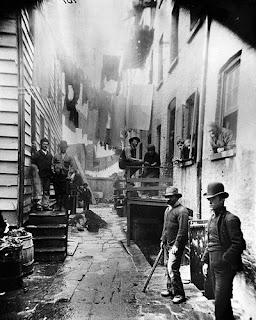 If you were an immigrant traveling to America via New York city in the last half of the nineteenth century, New York might have been but a pause on a longer journey. But if you planned to stay in New York and check out those heralded “streets paved with gold” you often ended up—you often looked for—an area of the city where there were others of your kind. And that place for Italians, Jews, Irish, Russians...was Five Points. If you’ve seen the horrendously violent movie, “The Gangs of New York” (I do NOT recommend it--I couldn't get through it) you know that in the 1840’s and 50’s this area of what is now the Lower East Side was not for the faint of heart. 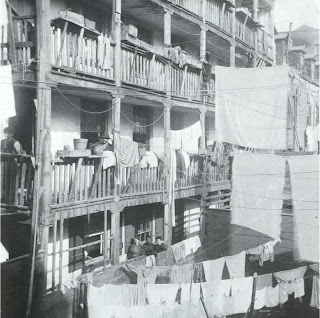 Five Points, and Mulberry Street, the area where the Scarpellis live in my novel Masquerade, at one time was a neighborhood for the middle class. But when they had water problems because of an underground spring, the area was abandoned to the poor. It was the first American slum. In 1880 there were 37,000 tenements housing nearly 1.1 million people. Most were one or two room apartments.  There was no running water and the bedrooms often had no windows at all.  The buildings were so close together people could hand things across the alley, window to window. 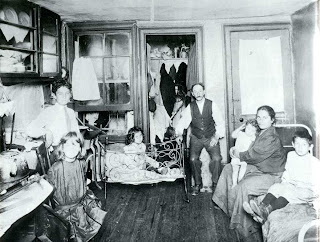 More than 100,000 immigrants lived in rear apartments (behind other buildings) that were wholly unfit for human habitation. "In a room not thirteen feet either way slept twelve men and women, two or three in bunks set in a sort of alcove, the rest on the floor."  There were also rooms where people could sleep for five cents a night, stranger next to stranger. 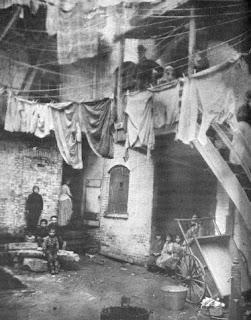 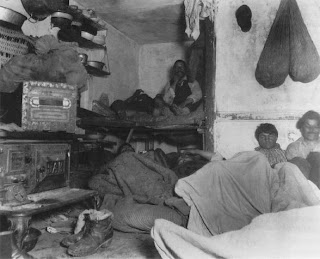 Most people--if they could get a job--worked 12-14 hours a day. There were thousands of homeless children on the streets, often abandoned by their parents.  I can't imagine the angst of those mothers and fathers, not being able to provide food or shelter... In the summer months 3-4 babies would suffocate in the airless tenements every night.
Mulberry Bend was one of the worst stretch of slums and in 1896 it was demolished to be turned into Columbus Park. Chinatown and Little Italy encroached, as did federal buildings to the south. If you'd like to see more pictures and a virtual tour, go here, to the Tenement Museum site: New York Tenement Museum
In future blogs I'll tell you a little about the children, how people earned a living, and the man who took it upon himself to change things. //Nancy Moser
Posted by Nancy Moser at 9:00 AM