Lying for a Living

Novelists sometimes get teased about "lying for a living." After all. . . we make it up, right?


I remember the first time I told someone that for every novel I write, I probably read at least two dozen works of non-fiction. "But. . . don't you just make it all up?" the wide-eyed and, I think, tempted-to-disbelieve person on the other end of that conversation asked.

Well, of course I make it up. I made up this paragraph for A Claim of Her Own:


"She would have recognized him anywhere. Even if he'd cut the brown hair that hung in ringlets around his broad shoulders. Even if he'd stopped wearing the long, heavily embroidered buckskin coat or abandoned his gleaming ivory-gripped pistols--always worn butt out. In fact, Mattie would recognize Wild Bill Hickok if all she could see whas his hands, because she'd spent more hours than she could count dealing cards to those hands down in Kansas, both before and after Bill's short stint as the sheriff of Abilene."


The thing is. . . to write that paragraph I had to know: What did Wild Bill Hickok look like? What did he wear? When was he in Deadwood? Would the truth fit the timeline of my novel? Why did he wear his guns that way? Did he cross-draw? Where would Mattie have had to have lived before coming to Deadwood, in order to have met and played cards with him? When was Wild Bill Hickok sheriff of Abilene, Kansas? Would that historical fact fit my imagined story? And all of that was just to enable one paragraph in a 100,000 word novel.

It's a good thing I adore the research part of writing historical fiction. Photographs of Wild Bill Hickok aren't hard to find. I used the one above after learning what Deadwood was like in 1876. I could honestly visualize a man dressed like this walking what Mattie sees as "the frenzied and filthy" main street in Deadwood.


As to Wild Bill's guns, those weren't the only weapons I had to research, because Mattie needed to pack, too. What would a young woman carry to defend herself back then? After thinking I knew, I decided I'd better verify my selection. It't not always possible to double check everything, but laziness shouldn't be one of the reasons I make a mistake. 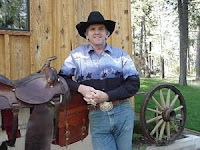 what he thought of my choice. His reply began, "Steph. . . sending a lady alone into Deadwood in 1876 is a dangerous thing. . . " and then he showed me the scale of the pistol I had given Mattie next to what she likely would have carried (a Colt pocket pistol). There was no way Mattie would have "hidden" the weapon I chose in the specially-constructed pocket she sewed into every dress she owned. None. Stephen Bly not only saved me from making a big mistake, but also made me laugh when he ended his advice, "...if you really want her safe in Deadwood...give her a double barreled sawed off 10 gauge shotgun. Of course, if she had to fire it, the recoil would knock her into Wyoming." Mattie does end up having to fire a double barreled shotgun...and I made sure to have the recoil knock her a "fur piece." Just not quite into Wyoming.


Another source, Wild Bill Blackerby, was kind enough to show me the "Cavalry Twist." Wild Bill Hickok didn't cross draw, and if I had had him do so in my novel, that would have been a bad mistake. A lot of people know a lot about Wild Bill Hickok!


In the process of researching A Claim of Her Own, I learned about placer mining, Wild Bill Hickok, Calamity Jane, small pox (not to be the topic of a future blog), and a man named Reverend Smith who became the prototype for my fictional preacher Aron Gallagher. (That's me at Preacher Smith's grave in Mt. Moriah Cemetery in Deadwood.) 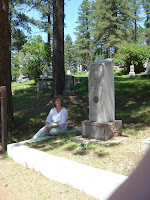 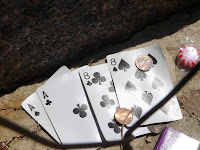 someone left at the base of Wild Bill's impressive monument. The stone wall in the foreground of the photo of Wild Bill's grave is where Calamity Jane is buried. 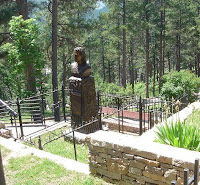 And by the way. . . Mt. Moriah Cemetery isn't the original graveyard used in 1876 ... or in my novel. Ingleside was the first cemetery. The bodies were exhumed and moved to Mt. Moriah later. I couldn't have Mattie going up the hill to Mt. Moriah in 1876 to sing at Wild Bill's funeral for more reasons than one. Mt. Moriah wasn't there yet, and Hickok's funeral happened in his friend Charlie's camp.

I may lie for a living, but I do try to make certain it's convincing thanks to my spending time with my literary nose to the grindstone. Now that I think about it ... who invented the grindstone? what kind of 'stone' is it? how much does one weigh? how long does it take to sharpen?

Have a blessed Lord's day, friends ... I have some research to do!