A Dozen Kids? Are you CRAZY?!

First, I want to thank Vince for providing me with the idea for this week’s blog when he wrote, “so much of what we think we know is wrong.” Immediately, a topic came to mind, because what I thought I knew was wrong.

What do most of us think when we see photos like this one? (Count the children, folks.) What did I think w

Show these photographs to a group of twenty-first century

women, share the list of birth dates, and it won’t be long before the topic of birth control comes up. “They didn’t have a choice.”

“If they’d had a choice, they never would have had so many babies.” “No wonder women died in childbirth so often. They had to be 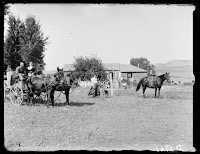 worn out! Who wouldn’t be?”

Those musings would likely lead into a discussion of the women’s rights movement and advances in medicine—all of it assuming that no woman in her right mind would want a dozen kids. I tend to look at these photos and title them, “I am woman—I am tired.”

Luna Sanford Kellie taught me to reconsider my assumptions about pioneer women and large families. She came to Nebraska in 1876 and kept house for her father and brothers until her husband finished business in the east and joined them. By late that fall, Luna, J.T., and their first child were living in their own soddy. Luna wrote, “We always planned for a large family. When Aunt Sophy asked me how many children I was going to have I told her ‛as many as I can.’ And J.T was of the same mind …we thought twelve the least number that would do us and fifteen would be better.”

Enter another assumption: “Well, of course they wanted a big family. They needed boys to work the farm!” And again, assumptions would tend to lead to a discussion of how female children were less valued in an agrarian society than males. But Luna Kellie said that one reason she wanted a large family was that children in small families learned to be selfish. She wrote, “so selfishly are they raised no one can live happily with them.” Luna would eventually give birth to thirteen children. She worked alongside her husband in the fields, planted an orchard, raised her children, published a Populist newspaper on her kitchen table, and, when she was in her seventies, homesteaded alone outside of Phoenix, Arizona. Obviously she was an exceptional woman. She was bright, articulate, and energetic. And she wanted at least a dozen children.

We all see history through a lens colored by our personal world view. That’s unavoidable. But history lovers, historical novelists, and historians alike should beware of putting our value judgments and our assumptions on others. We should remember that women of the past were just as diverse as women in 2010, and that the generalizations historians make based on their studies are just that—generalizations.