The Children of the Streets


The immigrant slums of Five Points (what's currently the Lower East Side in New York City) were hell for the children who lived there in the nineteenth century. Children were street-wise by a ridiculously early age. And what did they encounter on the streets?  Danger from horses, carts, and lack of food, gangs, criminals, boredom, freezing temperatures, and an absence of supervision. 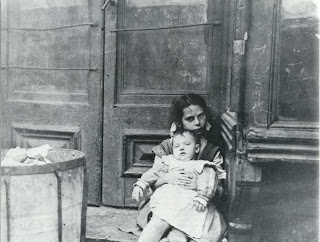 To make ends meet both parents had to work, often leaving the children to fend on their own, to take care of each other, or even to find ways to make money themselves.  They sold what they could find: scrap wood, bits of coal, newspapers, or stale bread.  Or they'd steal.  Or gamble.  Now, living in an age when we're wary of letting our children walk a few blocks to school or go to the mall by themselves, this freedom--and its consequences--is beyond comprehension. 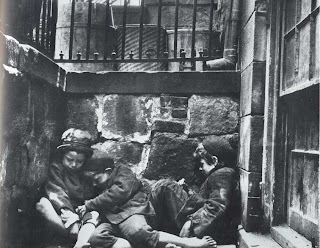 And then there were the orphans. Tens of thousands of them (who actually had parents, or not) all alone, without anyone to love or hold them. It tears my heart out to see the pictures of children huddled together in the cold.
The photo below is of a mere baby playing in the hallway of a tenement near the communal water tap. Did this child live?  Flourish? Was she hungry? 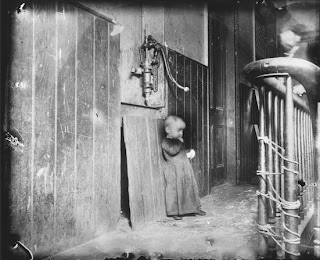 There were organizations who tried to help. The New York Foundling Hospital, the Children's Aid Society, and other organizations did their best to take in the poor children, often sending them out West to willing families (ever hear of the Orphan Trains?) One orphanage used to put a crib outside its door so mothers would leave their baby there rather than on the curb.  But it kept filling up so quickly, they had to bring it indoors.//Nancy Moser
Posted by Nancy Moser at 9:00 AM