One of my weaknesses as a writer is imagining faces. I know, I know. Fiction authors are supposed to have overactive imaginations. I do--just not when it comes to faces. Thankfully, it hasn't been a problem since I began collecting faces. It all started at an auction in a small town in southeast Nebraska. Among the boxes of things I planned to bid on were Victorian whites, redwork pillow covers, a Featherweight sewing machine, and a shoebox filled with old photographs. As I sat on one of the soon-to-be sold couches chatting with another auction goer, the woman revealed that she was a distant relative of "the deceased" and had helped organize the estate auction.


"Now, who on earth is going to want that box of old pictures?" she wondered aloud. "But the auctioneer said to put 'em out, and not a single one of us knew a soul in them, so. . . "

I smiled. "I want them." And so it began. It's been many years since that auction, and I've continued to collect old photographs. In fact,there's an entire shelf of "anonymous relatives" in my office, along with photographs of farmsteads and draft horses and Tin Lizzies and houses and rodeos and more.
Sometimes, a photograph inspires a character. This young lady (you gotta love that hand-on-hip) inspired Sarah, the orphan train run-away in Sarah's Patchwork.

The two more mature ladies to the right appear in Sixteen Brides. Do you recognize them?
Meet Miss Fannie Rousseau, soon to star 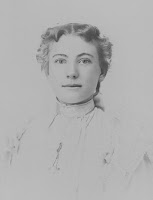 in her very own post Civil War adventure whereupon
a young lady from St. Charles, Missouri, ventures aboard
a steamboat bound for Fort Benton, Montana and encounters
gamblers and other assorted unsavory characters. I don't know about you, but I'm thinking this wide-eyed innocent has a few lessons to learn. Stay tuned!
And in case you were wondering. . . that auction? Bought the Victorian whites, the redwork pillow covers, and the Featherweight sewing machine. If only they could talk. . .
Stephanie G.
Posted by Stephanie Grace Whitson at 11:42 PM