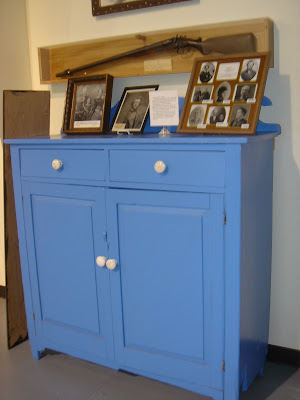 Have you ever read something that left you speechless? I mean jaw-droppingly-stop-reading-ponder-that-with-furrowed-brow-speechless?
Books like Women’s Diaries of the Westward Movement and Anonymous Was a Woman and Legacy and Covered Wagon Women take me into real lives that encourage and amaze me like no other kind of reading. So. . . what does that have to do with this blue cupboard?

I’m not a collector in the traditional sense of the word, but for many years now I’ve been collecting inspirational anecdotes (the ones that leave me speechless) about pioneer women. Sometimes those anecdotes inspire a book idea or a character. Sometimes they end up in this talk or that lecture. One of the anecdotes I’ve shared for years goes like this:

A woman on Plum Creek in Nebraska Territory started a store across from a pony express station. She baked as many as 100 pounds of flour a day, sold bread at 50 cents a loaf and made as much as thirty dollars per day. She made cheese which she sold at 25 cents a pound and travelers paid as much as $2 for the good meals she prepared.

And then, last year, as I was researching Sixteen Brides, I visited the Dawson County History Museum and met that unknown woman because. . . voila. . . this is her blue cupboard! Here’s the rest of her story (in brief):

Canadians Louisa and Daniel Freeman came to Nebraska by way of Michigan and Kansas, deciding to keep a store on the Oregon Trail in 1860. According to their children, the Freemans “were well acquainted with Sitting Bull, Red Cloud, Two Face and Spotted Tail,” who stopped and camped near their store while on hunting trips, paying for food with hides and furs.
In 1873 the Freemans crossed a frozen river and moved their trading post to Plum Creek Station (Nebraska) where they built a two-story cedar log building and a large barn with bunks around the edges where as many as twenty travelers could spend the night for fifty cents a night. Louisa baked and made cheese and sold meals and used this blue cupboard. She also had eight children, raised a large garden, and milked cows. (And I whined today about having to go to the grocery store! Whew--shut my mouth!) 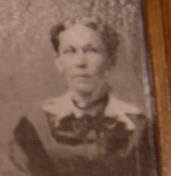 Louisa Freeman died in 1918. When I visited her grave, which overlooks the valley where she first settled in 1860, I realized that when she passed away, my own mother was five years old. Once again, I was reminded that “pioneer” life wasn’t all that long ago . . . and I have MUCH for which to be thankful. (And yes, Louisa Freeman inspired my imaginary friend Martha Haywood in Sixteen Brides.)

Here’s to blue cupboards and the women they represent and the “reality check” they can give us all when we feel overwhelmed.